A photo has been shared repeatedly in posts on Facebook, Twitter and in media reports that claim it shows an image of the Lebanese flag projected onto Egypt’s Giza pyramids. The posts claim the pyramids were lit up with the flag in order to show solidarity with Lebanon after a huge explosion in the port of Beirut in early August 2020. The claim is false; the photo has been doctored to include the Lebanese flag on a photo taken in April 2020.

The photo was published here on August 5, 2020, by Indonesian news outlet Sindonews.com.

The photo shows two Egyptian pyramids; one appears to be lit up with a projection of the flag of Lebanon. The other pyramid appears red in colour. 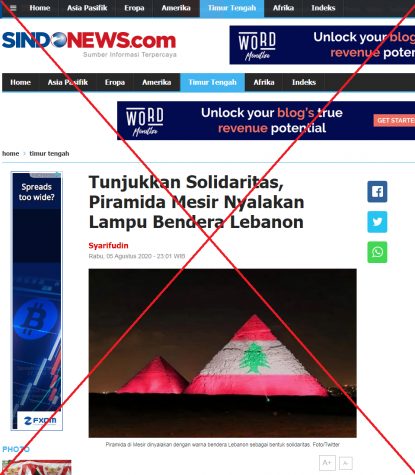 Screenshot of the misleading image on Sindonews.com

The photo's caption reads: “Pyramid in Egypt lit up with the colour of the Lebanese flag as a gesture of solidarity. Photo/Twitter”.

Two massive explosions rocked Beirut on August 4, 2020, killing more than 100 people and injuring thousands others, as reported by AFP here and here.

The image is also shared with a similar claim in English here and Arabic here.

The claim is false; the photo has been edited to include the Lebanese flag.

A reverse image search and a subsequent keyword search on Google found this similar image published on the official Facebook page of Egypt’s Ministry of Tourism and Antiquities on April 19, 2020.

It shows the same two pyramids lit up with purplish blue light. The words “EXPERIENCE EGYPT SOON” can be seen projected onto the pyramid on its front side.

Below is a screenshot comparison between the misleading image (L) and the photo published on the Facebook page of the ministry (R). AFP has highlighted prominent features with red circles.

This AFP video on April 19, 2020, shows a pyramid with the same light. The caption says:  “The Great pyramids are lit up with blue light and projected with a laser message ‘Stay Home’ on the Giza plateau outside the Egyptian capital of Cairo on the World Heritage Day, as the country fights the spread of COVID-19.”

The Egyptian Ministry of Tourism and Antiquities also refuted the claim about Giza's pyramids and the Lebanese flag after the recent Beirut blasts. “This news is not true,” a source at the ministry told a journalist at AFP’s Cairo bureau in a phone call.

Some of the posts shared the pyramids photo with a photo of the Burj Khalifa lit up with the Lebanese flag. The Dubai skyscraper’s official Facebook page posted the same photo on August 5, 2020, here, with a caption: “lights up in solidarity with our brothers and sisters #BurjKhalifa #Lebanon”.