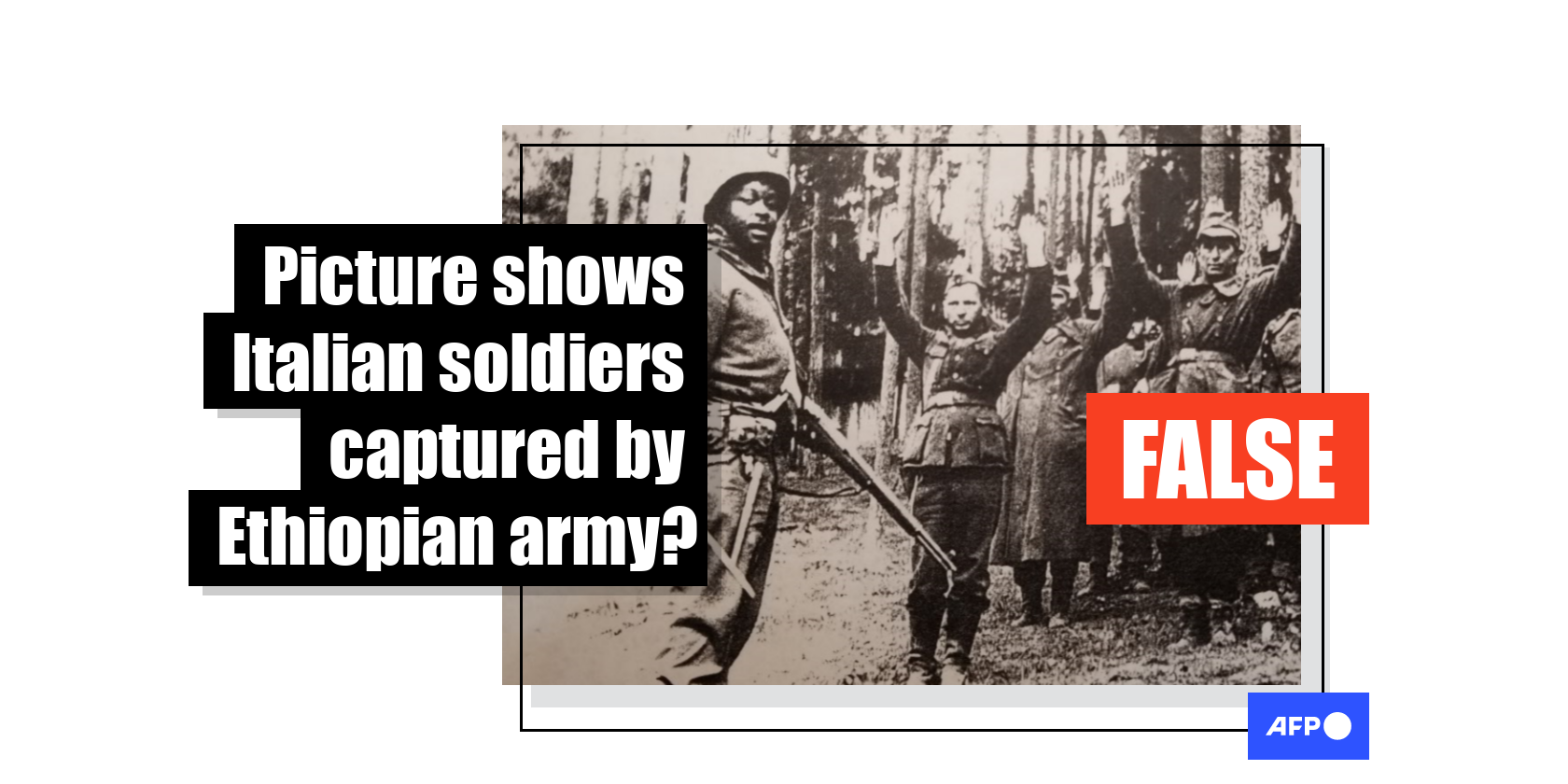 A black-and-white photograph of a man with a rifle and dagger holding a group of soldiers captive has been shared on Facebook hundreds of times with the claim that it shows Italian troops surrendering to an Ethiopian officer. The post insinuates this image depicts the Battle of Adwa in 1896. However, this is false. The photograph was taken at the end of World War 2 and shows an American soldier guarding German prisoners of war.

The post, which we’ve archived here, says “Italian troops surrendered to Ethiopian army (sic)” after a failed invasion of the African country in 1896, known as the Battle of Adwa.

Published on June 25, 2020, the post alludes to this battle, which is commemorated each year in Ethiopia.

The black and white photograph included in the post shows a black soldier with a rifle in one hand and a dagger in the other, guarding a troop of white soldiers. The captives all have their hands up.

The same image was also shared in a French post claiming it showed a Congolese officer of the Belgian colonial army fighting the Italians in 1940. 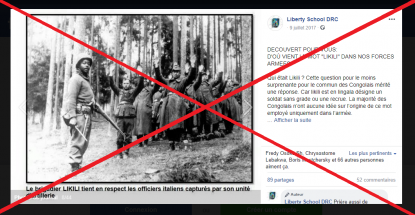 Screenshot of misleading claim in French, taken on July 28, 2020

Similar claims about the origin of the soldier were shared on groups managed from Ethiopia, Nigeria, and the United Kingdom.

Both claims are false: the black soldier is American and his prisoners of war are Germans.

A reverse image search using Google revealed the image comes from the National Archives of the US government. A “soldier of the 12th Armored Division stands guard over a group of Nazi prisoners captured in the surrounding German forest,” reads the caption.

Another reverse image search with TinEye led to an article published by The Atlantic in October, 2011 entitled “World War II: The fall of Nazi Germany”, in which the same photograph was reproduced.

The caption is similar to that in the US National Archives, but it dates the photograph by Associated Press (AP) to 1945. It also states that the location is an unknown forest in Germany.

Contacted by AFP Fact Check, writer Alan Taylor confirmed the image used in his article for The Atlantic was licensed from AP.

Who is the American soldier?

Lenches explained that about 600 African American soldiers served in combat in World War 2 as riflemen within the Armored Infantry Battalions of the 12th Armored Division. These men were part of companies A, B, and C, and were collectively designated as the D company.

The 12th Armored Division adopted the nickname “Hellcats” and went into battle in the European Theatre of Operations in 1944. About the time the photograph was taken in March 1945, they were moving east across the Rhine river in Germany towards eventual victory.

The precise location of the picture, however, is a mystery, as Lenches explained: “Signal Corps photographers were forbidden from tagging photographs with specific locations during the war in the interests of Operational Security.”