An image has been shared thousands of times in multiple Facebook posts which claim it shows a packet of pork crisps stamped “halal”, despite it being forbidden under Islamic law for Muslims to eat products made from pigs. The claim is false; the image was doctored to include the halal stamp.

Below is a screenshot of the misleading post published on July 9, 2019: 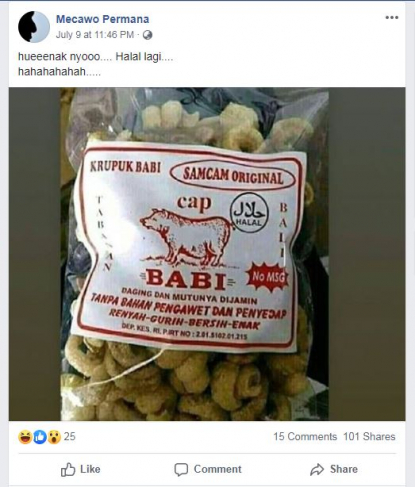 The Indonesian-language caption translates to English as: “So delicious...it is also halal...hahahaha.”

On the top left corner of the package, the two Indonesian words translate to English as: “Pork Crisps”.

A drawing of a pig can also be seen on the package, with the word “cap” written above translates to English as “brand” and “BABI”, below it, which means “pig”.

The text in red below translates to English as: “Meat and quality guaranteed. Without preservatives and flavoring”.

A halal logo can also seen on the top right of the label, in black.

Eating pig products is prohibited in the Islamic faith, as explained here.

The image in the misleading posts has been doctored. A keyword search on Google found the pork crisps shown in the photo for sale in a number of online shops, for example oleholehkhasbali.com, on the Hindu-majority Indonesian resort island of Bali.

However, there is no halal label on the crisp packets sold via the shop, as seen in the screenshot below: 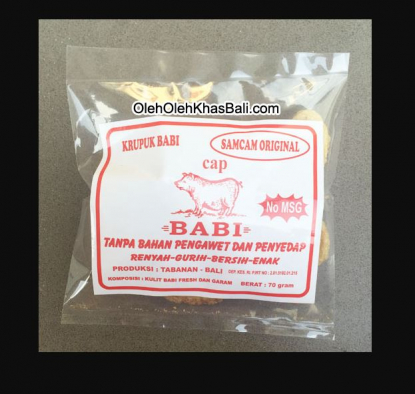 Screenshot of crisps seen in the online shop oleholehkhasbali.com

The owner of the crisp factory in Bali’s Tabanan district, Made Dharma Putra, confirmed to AFP by phone on July 16, 2019, that he had never registered his product to Indonesia’s halal certification agency.

“It is impossible for me to register the product. It is clear the product is made of pork and the drawing of a pig can be seen in the package. It is made for non-Muslims,” he said.

UPDATED: this fact check was updated 23/07/2019 to change the description of Bali's Tabanan from "town" to "district" second paragraph from end.