A blog post shared hundreds of times on Facebook claims that US President Donald Trump has joined calls to revoke the US citizenship of Philippine journalist Maria Ressa. The claim is false; the blog post was copied from a satirical article; an online search of Trump’s tweets and recent statements from the White House found he has not made any public statements about Ressa.

It includes a link to an article which shows US President Donald Trump and Filipino-American journalist Maria Ressa, the CEO of Philippine news site Rappler. 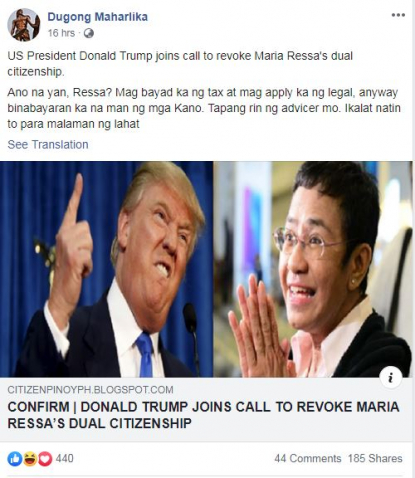 “So what will you do now Ressa? Pay your taxes and apply legally, anyway you're being paid by the Americans. Your adviser is also brave. Let's spread this so everyone will know”.

Ressa tweeted here on February 18, 2019 that she has never “hidden” her dual nationality and had “reclaimed” her Philippine citizenship in 2004.

The claim is false; the Facebook posts include a link to a blog post which contains text copied from a satirical article.

The blog post was published here by citizenpinoyph.blogspot.com on July 14, 2019. 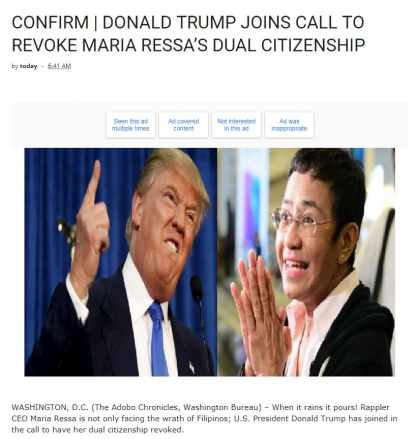 A keyword search subsequently found this article published by satirical website Adobo Chronicles on March 5, 2019, from which the misleading blog post was copied.

Adobo Chronicles describes itself here as a “source of up-to-date, unbelievable news”.

It states in its 'about' section: “Everything you read on this site is based on fact, except for the lies. We abide by the highest standards of  creative writing and intend to make this site as respectable as possible to the extent allowed by our fertile mind”.”

The articles only differed in one reference to the number of netizens who had allegedly signed an online petition to the Philippines' Department of Justice regarding Ressa’s dual citizenship.

Below is a screenshot of the text comparison on Copyleaks: 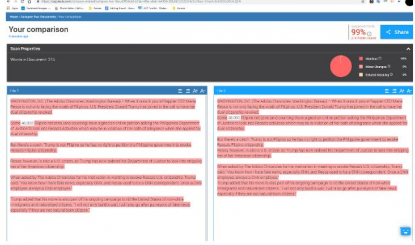 This online search for “Maria Ressa” from Donald Trump’s tweets returned no results.

The misleading blog post has been shared more than 500 times according to data from CrowdTangle.