A video has been viewed thousands of times in multiple Facebook posts in 2019 which claim it shows an Iranian man splashing milk on the Kaaba Islamic shrine in Mecca, Saudi Arabia as a religious offering. It adds that the man says in the footage that the shrine is a Shiva Linga -- a symbol of the Hindu deity Lord Shiva. The claims are false; the video has circulated online since February 2017 in reports about a Saudi man who threw gasoline on the shrine before he was restrained by bystanders. He did not say the shrine is a Shiva Linga in the video.

In the clip, a man in a white robe with a yellow shawl draped across his right shoulder can be seen spraying liquid onto a wall from a bottle. He can be heard shouting in Arabic: “Stay away, stay away… these people don’t have a religion, they are trading in the name of the Islamic religion, trading your religion and your nation, I swear to God they are selling you out like they have done to me. I swear to go, they are selling you out.” A group of people standing close to the man begin restraining him before the clip ends.

The misleading Facebook post's Hindi language caption translates to English as: “This Iranian man offered milk at Mecca, saying that his ancestors were Hindu and this is the holy Shiva Linga.”

Shiva Linga (or Shivling) refers to a symbol that represents the phallus of Hindu deity Lord Shiva as described here. Shiva’s devotees pour milk and water over the statuette as part of their prayer to their deity. 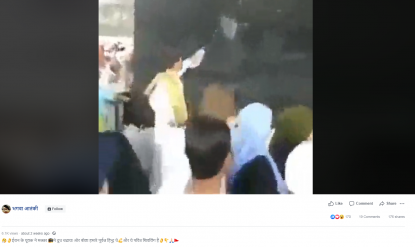 The video was also shared elsewhere on Facebook, for example here, here, and here with the same claim.

The claim is false; this report about the incident published by local Saudi news site Al Sabq on February 7, 2017 quoted a spokesman for the security forces at the mosque saying the man tried to set himself on fire.

“As soon as the security men noticed, they were able to prevent him and arrest him before setting fire (to himself), and his actions (show) that he is mentally ill.”

The tawaaf is an act of worship in Islam that involves circling the Kaaba seven times, as explained here.

Other news reports from February 7, 2017 recount the incident in a similar way here and here.

The man can be seen holding a bottle that contains a red-coloured liquid -- circled in yellow below -- in the screenshot of the video of the incident published by the Islamic Information website. 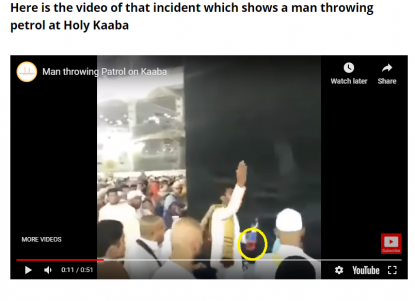 No, this headline about Indonesian President Joko Widodo has been doctored

No, this photograph does not show killings on Nigeria’s Port Harcourt-Bayelsa road