Photo of damaged road was taken in Thailand, not Nigeria

An image showing a damaged portion of asphalt road has been shared in multiple posts claiming this is a prime example of the shabby road network in Nigeria’s southern region. However, this is misleading; the photo was taken last year in Thailand.

The image appears in numerous social media posts, including this one on Facebook that claims it was taken in Nigeria’s southern Abia state. It has been shared more than 600 times since it was published on September 7, 2020. 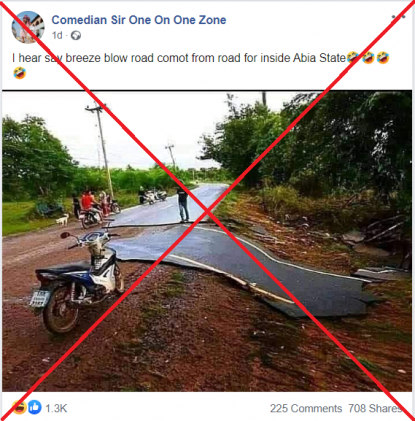 Although the Facebook account that published the image has a history of promoting humorous content, many of the comments suggest online users believe the road to be in Nigeria. Others were skeptical or dismissive, while some found it funny. 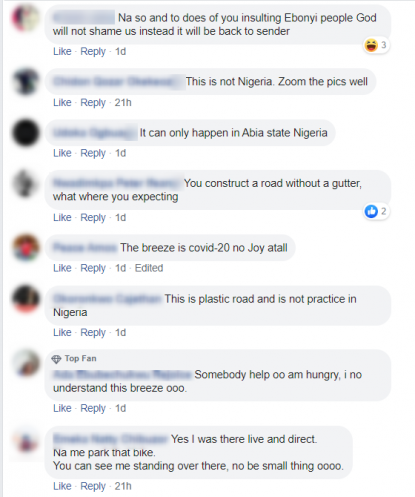 Screenshot taken on September 9, 2020, showing some of the comments on Facebook

Other parts of southern Nigeria are cited as locations for the road in similar claims on Facebook, such as this post, which reads: “Breeze destroy Obaseki newly constructed electioneering road (sic).”

Godwin Obaseki is the governor of Edo state, in southern Nigeria, who is seeking reelection later this month.

Although certain roads in Nigeria are indeed deplorable, like some in Abia as documented by online news site Premium Times, the picture in question was taken in Thailand.

AFP Fact Check ran a reverse image search and found it was published with other photos in this 2019 article. According to the report, and this one here, the images show the road connecting Ban Huai Thom and Na Nong Daeng communities in Thailand’s Amnat Charoen province.

The reports were based on the account of a Thai Facebook user called “Prince of Stream” who shared the images on August 31, 2019. The post’s Thai caption translates to English as: “This incident reflects the construction standard of roads near my house.”

While the initial post attracted comments condemning the standard of construction, an update to it by the same Facebook user suggested the road was properly built but simply not designed to withstand flooding.

The same set of photos posted by “Prince of Stream” was also published on Twitter on the same day in a tweet explaining how bad weather had struck the area where the road is found.

“After being hit by a storm like this, road workers call this Kanom Chan,” partly reads the tweet’s Thai caption in English. (Kahom Chan is a colourful layered type of Thai dessert and is intended in this context as a criticism of the quality of workmanship.) “Clearly the road was not coated correctly. They must have coated on a wet surface. Clearly seen here, the condition of the surface beneath has almost no rocks."

AFP Fact Check used the 2019 article as well as natural features and objects seen in the images to find the location of the road. 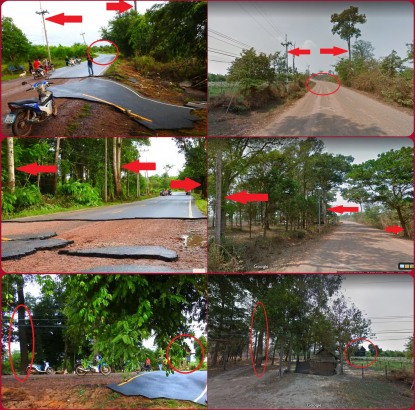 Using Google Maps Street View, we found a picture of the exact location in Thailand. Images from Google Maps were taken in 2015 before the construction of the road; we were unable to find any public information on when the road was built and if it was repaired, other than the Thai Facebook user saying it had been used for three to four years before the damage occured.

Using the more updated Google satellite view from this year, the same portion of the damaged road, lying just north of the Kham Sida river, can be seen as a white stripe.

A prototype of the plate number for private motorcycles appears among samples authorised since the 1990s. 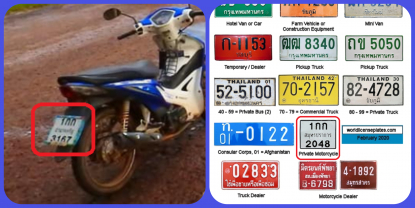 The license plate matches a format used in Thailand

Using images from other countries to portray horrible situations in Nigeria is a growing trend among critics in the African nation. AFP Fact Check has previously debunked such claims here and here.