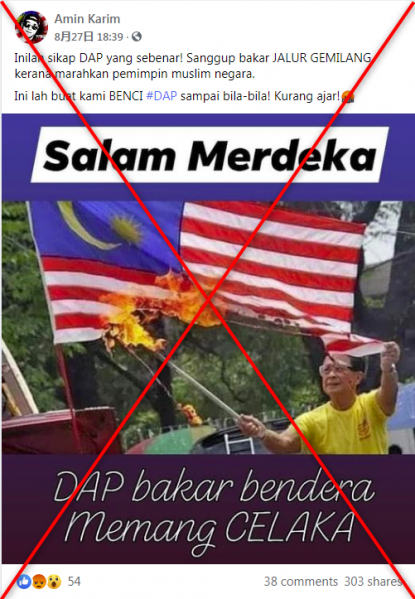 It shows a man in a yellow T-shirt burning the Malaysian flag.

The post’s caption, translated from Malay to English, reads: “This is the real attitude of DAP! Willing to burn JALUR GEMILANG because of anger at Muslim leaders of the country.

“This is what makes us HATE #DAP until whenever! Ill-bred!”

The Malay text superimposed on the picture says: “Greetings for Independence” and “DAP burns a flag Really WRETCHED”.

“Jalur Gemilang” is another name for the Malaysian flag.

“DAP” refers to the Democratic Action Party, a Malaysian opposition party where the majority are ethnic Chinese politicians.

The picture has also been shared more than 400 times after it appeared in other Facebook posts here, here, here and here, with a similar claim.

The photo was also posted here with a claim that it shows an Indonesian man burning the Malaysian flag.

A slightly different photo of the same flag-burning event appears in this Facebook post, which claims the Malaysian flag was burned by a supporter of Bersih, a coalition of non-governmental organisations which staged massive protests in demand for electoral reform in the country.

Below is a screenshot of the second misleading post: 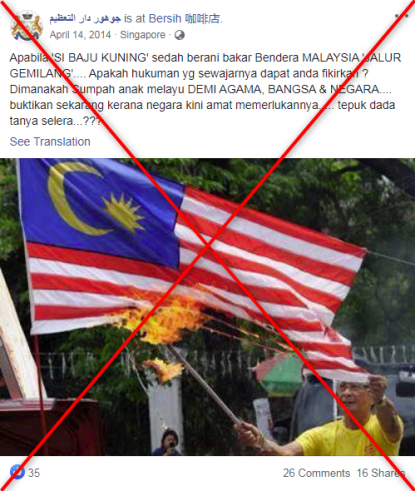 Screenshot of the second misleading post, taken on September 11, 2020

A reverse image search, followed by a keyword search on Google found that the photo was previously published by Philippine news outlet ABS-CBN here on March 6, 2013.

The report is headlined: “Malaysia flag burning”. The caption of the photo says: “Former Philippine police officer Abner Afuang burns a Malaysian flag on Wednesday during a rally in Manila to protest the military assault by Malaysian forces on Filipino gunmen in Sabah. Malaysian forces are rounding up elements of the group after the assault failed to end the three-week crisis.”

Below is a screenshot comparison of the photo in the first misleading post (L) and the ABS-CBN photo (R):

The second photo in the misleading post is an AFP photo, which can be seen here.

The photo, taken on March 6, 2013, is captioned:  “Abner Afuang, a former Philippine police officer, burns a Malaysian national flag during a rally in Manila on March 6, 2013 to protest against the military assault by Malaysian forces against Filipino gunmen in Sabah. Malaysia on March 6 escalated its hunt for armed Filipino invaders who dodged a military assault meant to crush them, as a Philippine guerrilla warned more fighters had arrived.”

Below is a screenshot comparison of the photo in the second misleading post (L) and the AFP photo (R):

AFP photo archives show that Afuang has burnt other nations’ flags in other occasions, such as a Chinese flag in 2015 here and a British flag in 2002 here.