Videos circulating online purport to show Tanzanian President John Pombe Magufuli making public appearances following week-long concerns about his whereabouts and health. The claim is false; one clip is from a 2019 news report when there were also concerns about Magufuli’s health, while the second video was shot just before the latest bout of speculation over his wellbeing.

“He appeared during a swearing-in ceremony of leaders he had appointed,” the anchor adds.

The YouTube clip was shared on Facebook here with a caption translated from Swahili that reads: “Magufuli has done great to show himself in public.” 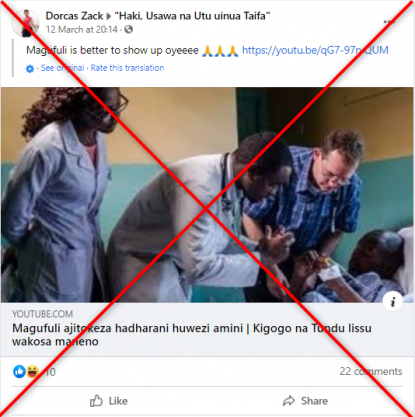 The same video was shared here and here.

In another video making the same claim, Magufuli is heard warning the press and the public about spreading rumours.

“Tanzania President John Pombe Magufuli has appeared in public following weeks of media speculations on his state of health. Appearing in a live Broadcast, Magufuli warned those fond of sharing malicious news that his government won’t hesitate to take action on them (sic),” reads the post’s caption.

The same footage was shared here.

However, neither clip is new and Magufuli is yet to be seen in the wake of fresh concerns about his health.

A Google search of the keywords “Afya Ya Rais Magufuli” (‘President Magufuli’s health’ in Swahili) reveals the first video was published on October 20, 2019, by Citizen TV.

At the time, there were online rumours about his wellbeing and whereabouts. The rumours were dispelled when Magufuli appeared for a swearing-in ceremony of government officials and envoys. This event was broadcast on the government’s Youtube channel here and in media reports here.

A second keyword search of “Magufuli uzalendo” (Swahili for ‘patriotism’) reveals that the second video has been online since February 25, 2021, before the latest concerns about Magufuli’s health started circulating.

One of the videos has a banner with the words “Uwekaji wa jiwe la msingi soko la Kisutu Dar es salaam” in the background. A search of the Swahili words on Google shows (here and here) that the clip is from February 25 when Magufuli laid a foundation stone for Kisutu Market in Dar es Salaam. 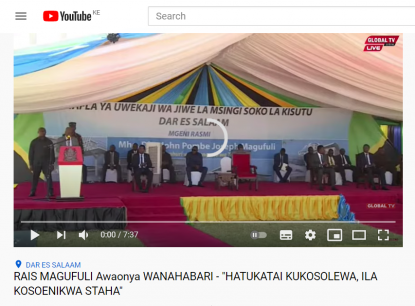 A screenshot of the YouTube video with the banner, taken on March 15, 2021

Magufuli was last seen in public two days later when he swore in a new chief secretary. He has since skipped a virtual summit with regional heads of state and three Sunday church services, which he regularly attends.

His absence led to fresh rumours on social media. The hashtag #Pray4Magufuli was trending in neighbouring Kenya last week.

While the Tanzanian government has dismissed the speculation as baseless, even threatening to arrest those spreading the rumours, the main opposition party Chadema has called for an explanation for the president’s absence.