A photo has been shared on Facebook alongside a claim that it shows students in Uganda returning to class after a Covid-19 shutdown. This is false: the girls in the photograph, taken in Tanzania in 2018, were expelled from school for falling pregnant and are seen dropping off their children at a care centre.

The post was published on March 2, 2021, by a Facebook page called Newsroom Uganda, which has more than 56,000 followers. It had changed its name from Kefa Images Ug in June 2020, according to the social network’s transparency data. 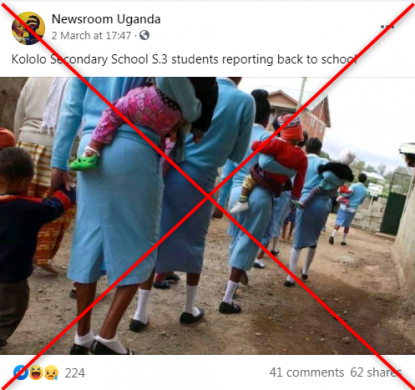 Kololo Secondary is a school in Uganda’s capital, Kampala.

The image in the post shows a line of young women in blue uniforms carrying and walking with children.

On March 20, 2020, all schools in Uganda were closed in a bid to contain the spread of Covid-19, even though the country had not reported any cases of the disease at the time.

A reverse image search led to a CNN investigation from November 2018 about Tanzanian girls being expelled from school after getting pregnant.

Tanzania’s schools routinely force girls to undergo intrusive pregnancy tests and permanently expel those who are pregnant, in some cases placing them under arrest.

The same girls in the image used in the false Facebook claim can be seen at 2’16’’ in the CNN video. The clip accompanies an online report about the World Bank revoking a planned $300 million educational loan to Tanzania over the country’s policy of banning pregnant girls from going to school. 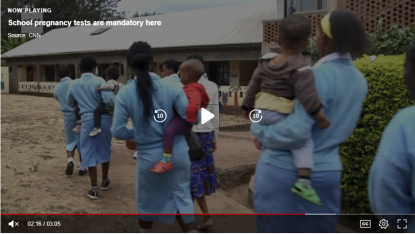 A link within the online report opens up a related article by the American broadcaster, where the image is featured in its original form, with the caption: “Young women dressed in uniform walk their children to daycare before attending trades courses at the Faraja Center, a shelter for vulnerable women.” 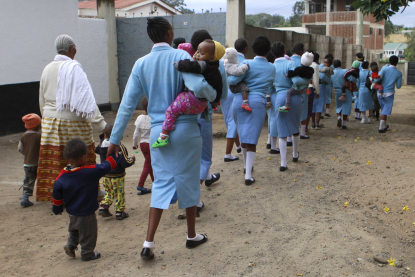 The Faraja Center in the Tanzanian city of Arusha provides vocational training for vulnerable women, many of them young mothers expelled from school because of their pregnancies. Images and videos from the centre’s website show its students wearing the same blue uniforms.

This is not the case at Kololo Secondary, where pupils wear maroon sweaters, white shirts or blouses, and grey pants or skirts. 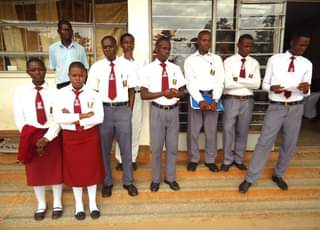 Image of pupils in their uniforms at Kololo Senior Secondary, taken from the school's Facebook page on March 15, 2021