A video has been viewed more than five million times in Facebook and Twitter posts that claim it shows Turkey’s President Recep Tayyip Erdogan meeting Palestinian children after deadly clashes between Israel and Hamas in 2021. The claim is false: the video shows Erdogan meeting children in the Turkish city of Ordu during a mayoral campaign in 2019.

The video was posted here on Facebook on May 23, 2021. It has been viewed more than five million times.

"The son of a lion has reached Palestine. Maybe to listen to the voices of oppressed Palestinians,” reads the post’s Urdu-language caption.

The footage shows Erdogan hugging a group of children, several of whom appear to be crying.

Screenshot of the video with the false caption. Taken on June 16, 2021.

The video circulated online after 11 days of airstrikes and rocket fire between Israel and Palestinian armed groups in the Gaza strip in May 2021.

The claim, however, is false. The video shows Erdogan meeting children in Turkey in 2019.

A reverse image search on Google of a keyframe extracted from the video found it was posted here on YouTube on January 21, 2019.

It was published by Turkish media outlet Türkiye.

Erdogan’s interaction with the same group of children can be seen at the video's one-minute three-second mark.

According to the video’s description, it shows Erdogan meeting citizens “before leaving Ordu, where he came to announce the AK Parti Ordu Mayor candidates”.

Below is a screenshot comparison of scenes from the video in the misleading posts (L) and the Türkiye video (R): 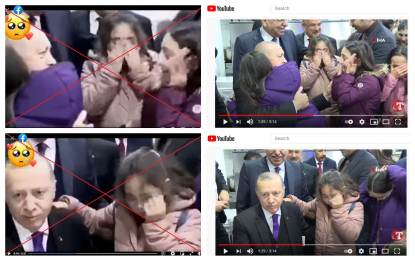 Screenshot comparing scenes from the video with the false claim (L) and the one from Türkiye (R). Taken on June 16, 2021.

Erdogan’s visit to the province was recorded on the Turkish presidency’s website.

It features photos of him wearing the same outfit as he is seen wearing in the video in the misleading posts. 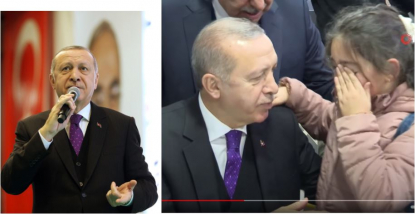 The girl wearing the pink coat can be heard speaking to Erdogan in Turkish. Her comments translate to English as: “I am crying because of my joy”.