A video has been viewed hundreds of thousands of times in multiple posts on  Facebook, YouTube and TikTok alongside a claim it shows a "surprise visit" by former US President Donald Trump to Switzerland in March 2021. The claim is false: the footage in fact shows two clips of Trump arriving at the World Economic Forum in Davos, Switzerland in 2018 and 2020.

The video was published on an Australian-based Facebook page here on March 3, 2021. It has been viewed more than 18,000 times. 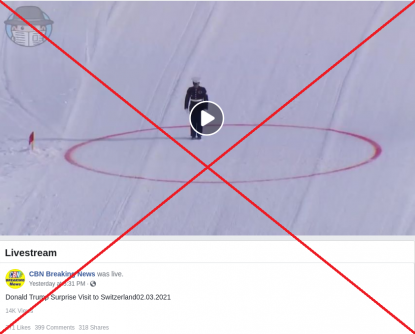 The video was also shared alongside a similar claim on Facebook here, here and here; on YouTube here; and on TikTok here.

The first clip, which can be seen from the start of the video to the two-minute 53-second mark, was originally published on YouTube here on January 26, 2018. The video is titled: “President Trump Landing in Davos/Switzerland”.

The Associated Press news agency also published footage from a different angle of Trump's helicopter landing in Davos in January 2018 on YouTube here.

The second clip, which can be seen in the video in the misleading posts from the two-minute 44-second mark onwards, was published on YouTube here by Indian news channel WION on January 21, 2020.

AFP also published footage from a different angle of Trump’s arrival at Davos on YouTube here on January 21, 2020.

There were no credible reports that former President Trump had visited Switzerland in March 2021. On February 28, 2021, he made his first public speech since Joe Biden became US president at the Conservative Political Action Conference (CPAC) in Orlando, Florida, the BBC reported. His speech can be viewed here on US television channel C-Span.