This ‘halal beer’ image is from a German satire website

Multiple Indonesian posts have shared an image that purportedly shows a brand of “halal beer”, suggesting it is permitted for Muslims to consume. The claim is misleading: the image was taken from a 2018 article on a German satire website.

The image was published on Facebook here on March 4, 2021. “Is this #Takbier available in Indonesia? I want to try a halal beer,” the Indonesian-language caption reads.

The image purports to show two bottles of “TAKBIER”, emblazoned with Saudi Arabia’s flag. The description on the bottle reads: “100% halal”. On the right-hand side of the bottles, an image of Saudi Crown Prince Mohammed bin Salman is displayed. 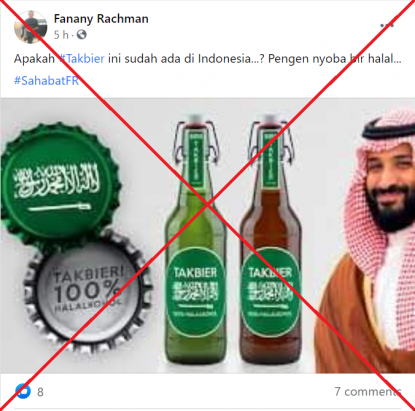 The image also appeared in other Facebook posts, such as here, here, here and here alongside a similar claim.

The image is actually taken from this article from German-language satire website Noktara.de published on May 13, 2018. The article's headline translates to English as: “Takbier: Saudi Arabia produces official World Cup beer.”

Noktara.de writes on its “Disclaimer” page: “If you should read our articles on Noktara.de, you have to have a sense of humour. You must not take the articles seriously. These contributions are popularly known as satire. No matter how realistic it looks, we made fun of it. Texts, images and screenshots were created by our editors.”

Below is a screenshot comparison of the misleading Facebook post (L) and the image seen in the Noktara.de article (R):

Screenshot comparison between the misleading post (L) and the image seen in the Noktara.de article (R)

The photo of Mohammed bin Salman was taken from an unrelated event. It was originally published in this Flickr album from the White House on May 20, 2017. It shows the Saudi crown prince shaking hands with former US secretary of state Rex Tillerson. 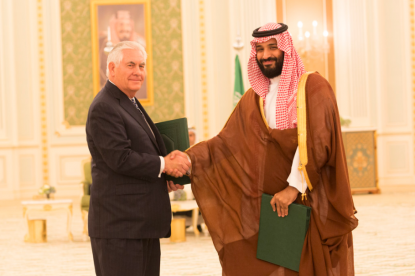