A video shared hundreds of thousands of times warns against using mobile phones while they charge because “electric waves” will pass through your body. This advice is misleading, according to experts who say other appliances would also exhibit similar harmless voltage leakage, while the real danger -- though slim -- could come from faulty batteries and low-quality chargers.

“Don’t talk on the phone while on charge” warns the video, shared more than 50,000 times on Facebook and more than 600,000 times on TikTok. It has spread in the United States, Canada, Nigeria, and the Philippines. 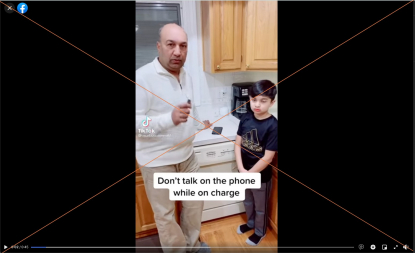 “If someone is talking on the phone while the phone is charging, the electric waves will come through your body” warns the video’s narrator.

Martyn Allen, technical director at Electrical Safety First, a charity in the UK, confirmed to AFP that the tool used in the video is a non-contact voltage indicator, commonly known as a voltage stick.

Using the stick, the video participants establish that “power” can be found in a phone charger when it is plugged into the mains and also when it is connected to a mobile phone while charging. The detector then lights up and sounds an alert when placed on the arm of someone holding the phone to his face while it charges. The alerts stop once the charger is unplugged.

“The video is grossly misleading,” Andrew Wood, who chairs the Department of Health and Medical Sciences at Swinburne University of Technology in Melbourne, told AFP by email, adding that “any cable with a connection to the mains (and not connected to any appliance) would do the same.”

“There is nothing special about the phone in this regard,” he said.

Eric Yeatman, head of Imperial College London’s Electrical and Electronic Engineering department, confirmed this, and added that other appliances would see a similar result.

“A phone charger has a unit at the wall end that converts dangerous mains voltage to harmless low voltage DC which travels along the lead and into your phone,” he said.

According to Yeatman, a “tiny amount” of the mains frequency may be picked up by a voltage stick but is “generally harmless.”

“This is true for anything you hold while it’s plugged into the wall, like a kitchen hand blender,” which would likely yield results similar to those shown in the video if it were subject to the same test, said Yeatman.

Allen added that a voltage stick like the one used in the video would even react to a balloon that had been rubbed on fabric.

Some low-quality phone chargers or faulty batteries could represent a small risk of electrocution, burns or fire, none of which appears relevant to the claim in this video.

“If you have a cheap knock-off charger then the mains leakage is likely higher, but still not causing you any harm unless it fails completely, in which case you could be electrocuted,” Yeatman said. He said he was not aware of that ever happening.

“The bigger danger from cheap chargers is that they fail and catch fire,” said Yeatman.

Costas Constantinou, Professor of Communication Electrodynamics at the University of Birmingham said by email that the only theoretical danger is “if the integrated battery pack of the mobile phone was damaged it would present an elevated burn hazard during charging.”

He added there are well-documented instances of the potential fire hazard posed by lithium-ion batteries, the ones used in mobile phones, “but those have absolutely nothing to do with the erroneous claims of the post in question.”

Allen, of Electrical Safety First, concluded that “the only sensible advice is to not charge your phone while in the bath, otherwise there is little to no evidence to back up the claim that using your phone while it charges is dangerous.”

According to the World Health Organisation (WHO) “current evidence does not confirm the existence of any health consequences from exposure to low level electromagnetic fields” like the one detected by the voltage stick in the video.

Regarding the risks of mobile phone use more generally, the US Food and Drug Administration concluded that “the weight of nearly 30 years of scientific evidence has not linked exposure to radio frequency energy from use of cell phones to health problems.”