Articles and social media posts in multiple languages claim that the Obama Foundation posted a tweet on May 17, 2020 with a photo of George Floyd, eight days before his death in police custody. This is false; the foundation said the tweet’s preview image refreshed to a photo taken on May 30 when its website updated, and Twitter confirmed that thumbnails associated with tweets can change.

“Obama Foundation Tweeted About George Floyd on May 17th, A Week Before His Murder,” reads the headline of an article shared on Facebook and Twitter.

Screenshot of a false headline on WorldTruth.TV, taken on June 18, 2020

Floyd, 46, died on May 25 when a white police officer knelt on his neck for nearly nine minutes in Minneapolis, Minnesota. Weeks of demonstrations against police brutality toward black Americans have followed.

The misleading article concluded that “the whole thing was planned in advance.” This is false; AFP on June 5 debunked the claim that George Floyd’s death was staged.

Neither the May 16 nor May 17 tweet originally featured the image of Floyd, because the photo was not taken until May 30.

“Websites can choose a preview image (Twitter card), that shows up when the site is linked to in tweets. So older tweets may have the card change when the website updates the card,” a Twitter spokesman told AFP in an email.

The Obama Foundation told AFP by email: “There is no truth to this internet rumor. The preview image for Obama.org updates dynamically on social media sites, based on the information set. The photo with the George Floyd protest sign that previewed for Obama.org was taken on May 30, 2020 and first used on our site on May 31, 2020.”

The foundation also said: “Twitter’s web crawlers re-index the preview information on pages, roughly every week and it subsequently dynamically updated the preview images for older posts with the Obama.org URL.”

The May 17 tweet from the Obama Foundation contains a link to the organization’s home page. Checked on June 18, neither the tweet nor the webpage show the image of Floyd any longer. 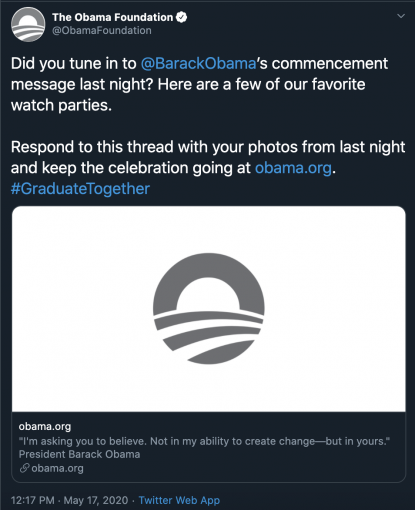 This webpage within the Obama.org site, however, still features the Floyd image.

A Google reverse image search of the Floyd picture with results limited to the first week of June 2020 leads to an article crediting the photo to “CNS photo/Christopher Dilts, Sipa USA via Reuters.”

A new search in Sipa USA’s online archive for the name of the photographer, “Christopher Dilts,” with results limited to May 30, yields the original image, captioned: “Demonstrators protest in response to the police killing of George Floyd on Saturday March 30, 2020 in Chicago, IL.”

To clarify whether the photo was taken in March or May, AFP reached out to Dilts, who explained that the March date in the caption is incorrect due to an error on his part while sending in the demonstration photos.

“That’s a caption typo that I caught after filing (I was in the middle of the protest and honestly have no idea how I made an error like that). I caught it and re-uploaded, but apparently the new images didn’t swap,” Dilts told AFP.

AFP obtained the original image from the photographer and pulled the metadata, which shows the photo was indeed taken Saturday, May 30 at 2:39 pm US Central Time. 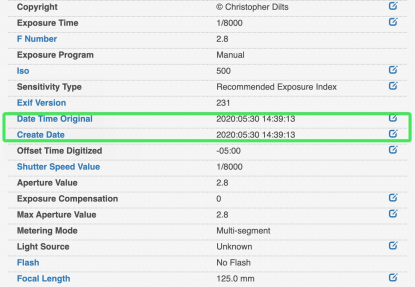 Screenshot taken on June 18, 2020 of metadata for Christopher Dilts’ photo of a George Floyd demonstrator

AFP Fact Check has debunked 35 false and misleading claims about Floyd and protests following his death. All are available here.