Skip to main content
(FILES) In this file photo taken on November 26, 2020 US President Donald Trump speaks to reporters after participating in a Thanksgiving teleconference with members of the United States Military, at the White House in Washington, DC. (AFP / Andrew Caballero-reynolds)

Citing a tweet from a New York Times reporter and a UK newspaper report, multiple social media posts in South Korea claim that Donald Trump will be “reinstated” as president in August 2021. But the claim is false: NYT journalist Maggie Haberman told AFP that she had not said Trump would be reinstated; the UK newspaper report does not claim that the former US-president will be back in office by August.

The Korea-language caption says: “Breaking news! It has been decided that Trump won in the 2020 Presidential election. Trump said he would come back to the White House as early as in August this year. The time has come.” 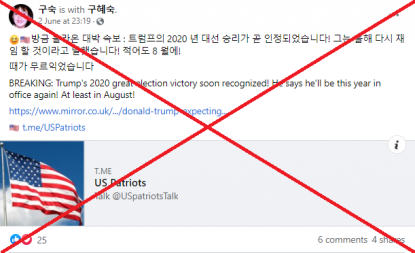 The claim was shared alongside a link to a report in British tabloid The Daily Mirror headlined: Donald Trump ‘expecting to be reinstated as US President by August’.

Similar claims have been shared on Facebook here, here and here.

The Daily Mirror report does not say that Trump will return as the US President by August 2021.

The report cites a tweet by New York Times reporter Maggie Haberman which describes Trump’s purported belief that he will be reinstated as president by August.

The tweet says: “Trump has been telling a number of people he’s in contact with that he expects he will get reinstated by August (no that isn’t how it works but simply sharing the information).”

Haberman told AFP that she had not said Trump would be reinstated.

“At no point did I say he would be returning to office - the tweet said that’s not how this works. It does say this is what he’s saying to people,” she said June 4, 2021.

Keyword searches on Google found no reports from the NYT or any reputable media that claimed Trump would return to office by August 2021.