Skip to main content
Rudy Giuliani looks at documents during an appearance before the Michigan House Oversight Committee in Lansing, Michigan on December 2, 2020 (AFP / Jeff Kowalsky)

Dominion’s lawsuits against Giuliani and Powell are ongoing

Social media posts shared thousands of times claim election technology company Dominion lost its defamation lawsuits over allegations of vote fraud that attorneys Rudy Giuliani and Sidney Powell made against the firm. This is false; court records and a lawyer for Dominion say the cases are still open, meaning no verdict has been reached.

“ABSENT from the News Dominion LOST their law suits against Rudy Giuliani and Sidney Powell,” a May 30, 2021 Facebook post reads. 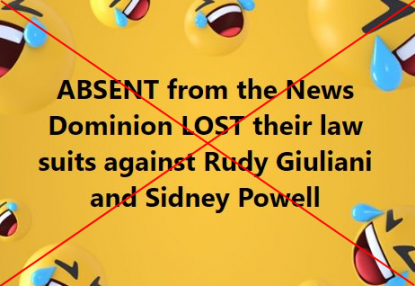 Similar posts can be found here, here, here and here.

Dominion filed defamation suits in January 2021 against Giuliani and Powell, who were part of former president Donald Trump’s legal team, alleging that they falsely accused the company of involvement in 2020 election fraud.

Court records on the Giuliani and Powell cases -- obtained via the Public Access to Court Electronic Records (PACER) database -- show that the two lawsuits were still ongoing as of June 4, 2021.

Megan Meier, a lawyer for Dominion, also confirmed to AFP that “both cases are open.”

Dominion, whose machines were used extensively during the 2020 US presidential election, has been repeatedly targeted with unfounded claims by Trump and others that it helped rig the vote in favor of Joe Biden, who took office on January 20.