No, this video does not show a recent attack on illegal immigrants in South Africa

A video being shared on Facebook purports to show the badly burned victims of an attack on  illegal immigrants in South Africa. In fact, we know that the video does not show a recent attack in South Africa -- it was very likely filmed in Nigeria. We’re still trying to find out the full story behind it. Can you help us?

The April 18 video, which we’ve archived here, shows people with severe burns being painfully ushered out of a bus while onlookers film with cell phones.

The caption reads in French: “Their only crime is to be illegally in South Africa! If South Africa does this to its fellow Africans, why are we caught red-handed when Donald Trump or other Western leaders try to humanely deport clandestine immigrants?” 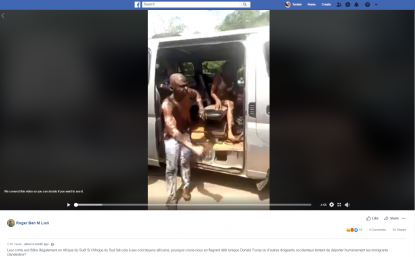 South Africa has seen repeated spates of violence against immigrants from other countries in recent years. Foreigners have found themselves a target for anger over chronic unemployment, with locals accusing them of taking up scarce jobs.

An attack of this kind on immigrants, causing severe injuries, would have made news in South Africa -- just as the most recent spate of violence did in March in Limpopo and KwaZulu-Natal. Three South Africans were killed and some 300 Malawians were displaced in the city of Durban by the unrest. Dozens asked to be repatriated, as reported by AFP.

Even then, misleading videos and images were widely shared on social media purporting to show the violence -- we debunked some of them here.

We used the online video analysis tool InVid to run a reverse image search for YouTube thumbnails matching the video of the burns victims. It quickly led us to two videos published in April that mentioned a fire at Imo Airport in southeast Nigeria. 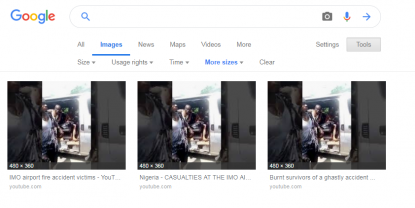 A screenshot taken on April 26, 2019 of the search results

But the third version of the video was uploaded to YouTube back in September 25, 2018, entitled “Burnt survivors of a ghastly accident (disclaimer: very graphic)”. 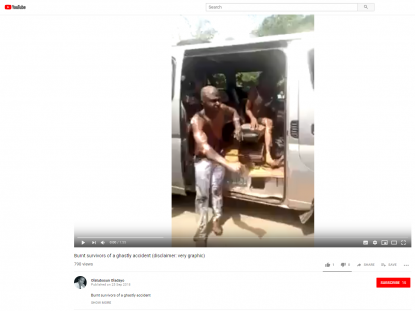 A screenshot taken on April 26, 2019 of the video on YouTube

The captions of the first two YouTube videos suggested the footage was filmed in Nigeria. But the major airport fire which they appear to be referring to was in April 2019 -- months after the first version appeared, referring to a “ghastly accident”.

So these too videos, too, appear to be misleading. And indeed, a Google search for “Imo airport fire” showed that this claim had been rejected in a debunk on April 10 by Nigeria’s International Centre For Investigative Reporting.

The ICIR quoted the Federal Airports Authority of Nigeria’s general manager of corporate affairs Henrietta Yakubu as saying the recorded victims were not part of the Imo Airport incident as there were no casualties. The video was filmed after a petrol tanker fire, she added.

Press Release:
FIRE INCIDENT AT OWERRI AIRPORT.@FAAN_Official wishes to inform passengers and the general public that there was a fire incident that affected some parts of the terminal building of Sam Mbakwe International Cargo Airport, Owerri at about 1400hours today.

So where was the video filmed?

A couple of clues still point strongly towards Nigeria. Towards the end of the video, you can see a uniformed officer. A few words can be made out on his badge as well as the Nigerian flag.

We Googled the words “Federal Road Nigeria” which led to the Federal Road Safety Corps in Nigeria -- images on their Facebook page show that the badges match. 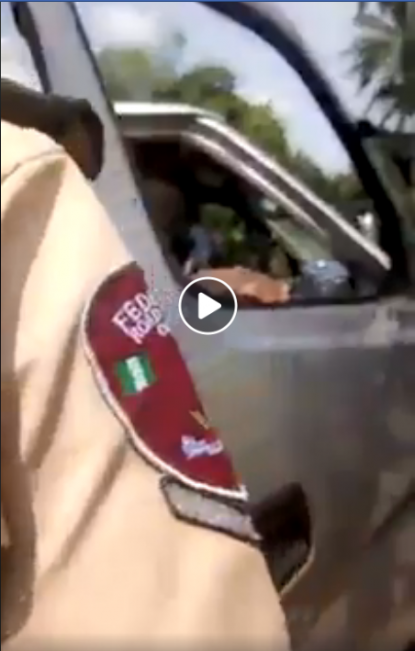 A screenshot of the video taken on April 26, 2019 of the uniform in the video 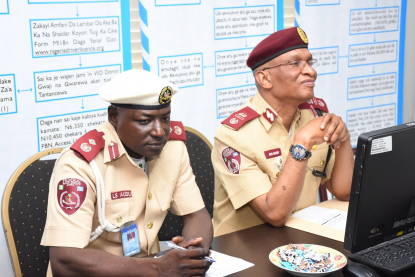 Mayowa Tijani, AFP’s fact-checker in Lagos, also confirmed that the voices heard in the video are speaking Pidgin English as well as Igbo, which is predominantly spoken in southeast Nigeria.

We reached out to the person who posted the video back in September 2018. He replied that it was filmed “somewhere in Nigeria” but did not reply to further questions and it was unclear where he obtained the footage.

Since one of their officers appears in the video, we’ve contacted Nigeria’s Federal Road Safety Corps to try to find out more about when and where it was filmed. We’ve also contacted the Federal Airports Authority of Nigeria to ask more about the tanker explosion explosion mentioned by Harriet Yakubu. The Nigerian authorities have yet to get back to us.

If you know where this video was filmed, please get in touch.

In the meantime, it appears highly unlikely that the video shows the aftermath of an attack in South Africa -- and we can rule out the idea that it was filmed during the most recent spate of violence in March. It was already online as early as last year, and all the available evidence points to it being filmed in Nigeria.