No, this video does not show a raid on illegal workers in Indonesia just before national elections

A video clip that has been viewed hundreds of thousands of times on Facebook purports to show a raid on illegal Chinese workers carried out by the Indonesian government a few months before April’s presidential election. The video does show a raid on illegal workers, but the footage is four years old and has no connection to the polls.

The five-minute video has been shared repeatedly on Facebook, for example here where it has been viewed nearly 650,000 times since it was posted January 18.

It has also been viewed nearly 200,000 times since it was posted here on the “Pendukung#2019GantiPresiden” page, which supports Prabowo Subianto, the sole challenger to incumbent Joko Widodo, in Indonesia’s upcoming presidential elections. 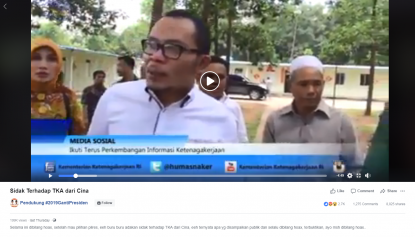 The post’s translated caption reads: “A raid on illegal workers from China carried out hastily just ahead of the presidential election to disprove what has been publicly declared a hoax.”

Widodo has repeatedly rejected claims that Indonesia has been flooded with millions of undocumented workers from China, according to this Jakarta Post report.

One comment on the Facebook post said: “Everything done by the current administration is only aimed at attracting voters because the election is imminent. Why did the government not do this raid in previous years? Many people have reported similar cases yet nothing was done by the government to respond. For sure, I will vote for Prabowo on April 17.” 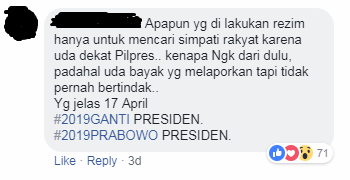 But the video does not show a recent raid on illegal Chinese workers.

The clip’s description says it shows a team from the ministry arresting five undocumented workers from China at a mining site in South Kalimantan province on March 14, 2015.

At 1:22 in the video, a blue banner appears with text saying: “A raid by the manpower minister at the PT Merge Mining Industry’s mining site in Banjar regency, South Kalimantan, Saturday, March 14. The arrested illegal workers are from China.”

The banner can also be seen at 1:22 in the clip featured on the false Facebook posts.

Below are the screenshots comparing the exact moment from the two clips.