No, this picture does not show Indonesian ride-hailing app drivers declaring support for a presidential candidate

An image shared hundreds of times on Facebook claims to show drivers from two major ride-hailing apps declaring their support for former military general Prabowo Subianto in Indonesia’s upcoming presidential elections. The image is a doctored photo of drivers objecting to regulations on ride-hailing services which has no link to the election.

The picture, which has been shared 600 times since it was uploaded to Facebook on January 21, shows what appears to be motorcycle taxi drivers signing a white banner with text that reads: “Prabowo Presiden” (Prabowo for president).

There is a watermark of Tribunnews.com -- an online media outlet in Indonesia – at the bottom right of the image.

Below that is text that reads in English: “We, Grab and Go-Jek Indonesia, fully support Prabowo and Sandi in Indonesia’s presidential election. Ten million signatures supporting #02.” 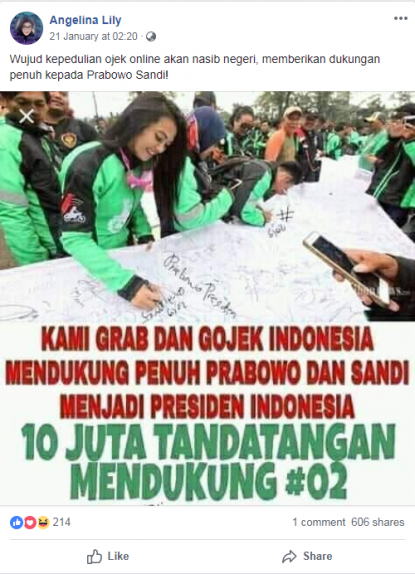 Grab and Go-Jek are Indonesia’s two biggest ride-hailing services, while “#02” refers to the ballot number of Subianto and his vice-presidential running mate Sandiaga Uno. The pair are challenging incumbent leader Joko Widodo and his running mate Ma’ruf Amin in April 2019 elections.

The post’s caption translates as: “Online motorcycle taxis show they care about the nation by pledging full support for Prabowo-Sandi pair.”

The words “Prabowo Presiden” do not appear in the original picture. 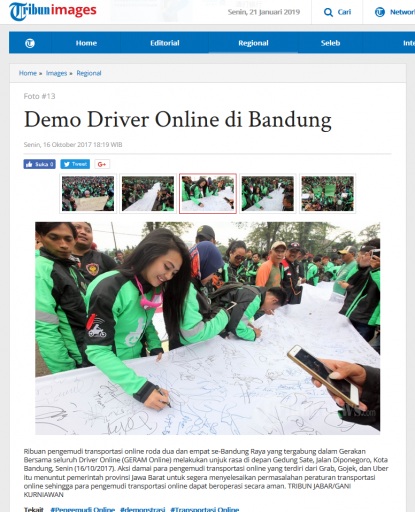 Screenshot of the Tribunnews.com article with the original photo.

The caption on the Tribunnews.com photo, translated into English, reads: “Thousands of online motorcycle taxi drivers in Bandung and in the city’s outskirts who are part of the Movement  Of All Online Drivers (GERAM Online) stage a rally in the Sate building, Bandung, Monday, October 16, 2017.

“The peaceful rally, joined by drivers from Grab, Gojek and Uber, demanded that the West Java administration resolves problems stemming from local online transportation regulations so that the drivers can properly work.”

Bandung is the capital of Indonesia’s West Java province. Sate building refers to the office of the province’s governor.