No, Trump did not complain on Twitter about a ‘rally’ by Ethiopians or Eritreans

A screenshot which has racked up hundreds of shares on Facebook purports to show a tweet by US President Donald Trump criticising ‘Habesha’s rally’ in front of the White House. ‘Habesha’ is a word used to refer to both Ethiopians and Eritreans. However, there is no record of Trump posting such a message and forensic analysis suggests the image has been tampered with. We also found no evidence of a recent major protest by Ethiopians or Eritreans at the White House.

The screenshot, which has been shared via several different Facebook accounts, shows a tweet purportedly by US President Donald Trump which condemns ‘Habesha’s rally infront (sic) of Whitehouse (sic)’. We’ve archived a few of the posts sharing the screenshot here, here and here. 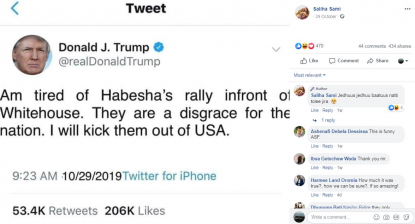 A Google image search of the terms ‘Ethiopia’ and ‘White House’, and ‘Eritrea’ and ‘White House’ reveal news articles on several demonstrations near the US president’s residence in recent years, including Ethiopians protesting against Obama’s visit to Ethiopia in July 2015. However, we couldn’t find any sign of a recent ‘rally’ involving Ethiopians or Eritreans, despite the suggestion that the tweet, supposedly posted on October 29, 2019, was referring to a recent event.

AFP’s bureaux in Washington and Addis Ababa said they were similarly not aware of any recent protest by the Habesha community in front of the White House.

However, an AFP journalist in Addis Ababa said there have been online protests by Ethiopians both at home and abroad over the United States’ role in talks between Ethiopia, Egypt and Sudan over a giant dam Ethiopia is building on the River Nile.

Aside from the lack of evidence for the “rally” mentioned in the supposed Trump tweet, visual clues suggest the screenshot is fake.

Trump may be known for his linguistic gaffes, but the “tweet” is littered with spelling and grammatical mistakes, including “Whitehouse”. We can also see that the tweet is not written in the standard font used by Twitter. Below is a screenshot of the fake tweet (left) compared with a genuine tweet (right) from Donald Trump’s official account. 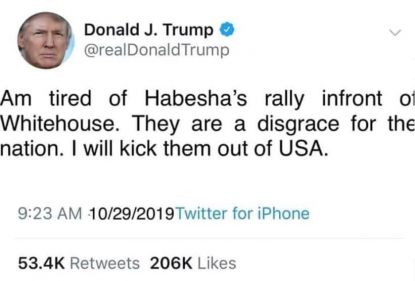 A screenshot of the fake tweet, taken on November 7, 2019 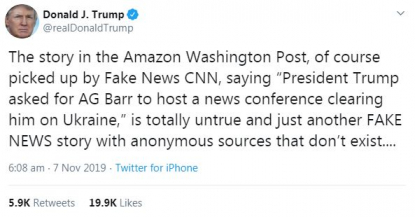 A screenshot of a genuine Trump tweet, taken on November 7, 2019

The date on the tweet also appears to have been crudely pasted on — again, in the wrong font — and is squashed too close to both the “Twitter for iPhone” which appears next to it on the right, and the grey dot to the left.

The message was supposedly also posted at the exact same time on the exact same day as another Ethiopia-related Trump tweet debunked by AFP, suggesting the same culprit is responsible.

We ran an advanced search on Twitter to see if Trump has ever mentioned the word ‘Habesha’ on his official Twitter account @realDonaldTrump. It found no results.

A screenshot of an advanced search on Twitter, taken on November 7, 2019

To be sure the tweet wasn’t deleted, we used the Trump Twitter Archive, a tool that allows you to trace back tweets made by the US president -- even posts that have been deleted. We found no tweets containing the word ‘Habesha’. 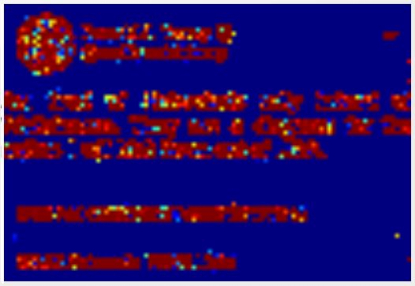 A screenshot of InVID forensic analysis of the fake tweet, taken on November 7, 2019 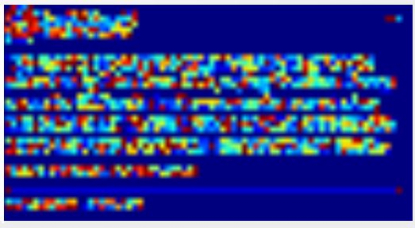 A screenshot of InVID forensic analysis of a genuine Trump tweet, taken on November 7, 2019

AFP has reported many cases of fake Trump posts in the past, for example here and here. This AFP fact-check about fabricated Trump tweets on Canada and this post about false posts from Zimbabwe show how websites allowing people to produce fake tweets can be used to spread misinformation.