A video has been viewed hundreds of times in multiple Facebook posts alongisde a claim it shows Indian and Pakistani soldiers dancing together to celebrate the arrival of Sikh religious pilgrims in Pakistan in October 2019. The claim is false; the video has circulated in online since 2018 in reports about Indian and Pakistani troops dancing together whilst visiting Russia for a joint military training exercise; media reports from the same year state that representatives from the two armies travelled to Russia for a major anti-terror drill.

The one-minute 27-second video was published in this Facebook post on October 27, 2019. It has been viewed hundreds of times.

It shows military personnel from Pakistan and India dancing together to popular Punjabi songs.

The caption refers to an initiative by the Pakistani government to open a 4.7 kilometre-long visa-free corridor for Indian pilgrims to enter Pakistan and visit religious holy sites on the 550th birth anniversary of the founder of the Sikh faith, Baba Guru Nanak.

India and Pakistan signed the so-called Kartarpur agreement on October 24, 2019, despite tense relations between the two countries. 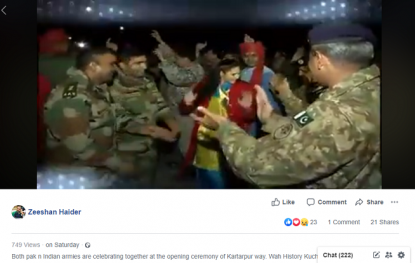 The same video was shared here and here with a similar claim on Facebook.

The claim is false; the video has circulated online since at least 2018 about troops dancing in Russia, more than one year before the Kartarpur agreement was signed.

A keyword search on Facebook found the same video was published here on September 1, 2018.

Below is a screenshot comparison of the video in the misleading posts (L) and the video published in September 2018 (R):

Below is a screenshot comparison of the ABP video (L) and the misleading Facebook video (R):

This Press Trust of India report explains the background to the footage, which was shot during military drills in Russia attended by both Indian and Pakistani troops in August 2018.

The report's first paragraph states: "For the first time, the militaries of India and Pakistan are taking part in a mega anti-terror drill of the Shanghai Cooperation Organisation (SCO) in Russia, aimed at expanding cooperation among the member countries to deal with the growing menace of terrorism and extremism."

Here is an official report on the exercises published by the Russian military, which mentions the participation of Indian and Pakistani troops.