No, Zimbabwe’s opposition leader didn’t tweet this — but it does show how easily such messages can be faked

The screenshot of a supposed tweet by Zimbabwe’s main opposition MDC leader Nelson Chamisa, praising the efficacy of the recently introduced Zimbabwe dollar, has been shared hundreds of times on Twitter. The tweet is fake, as Chamisa confirmed -- but more fake tweets attributed to Zimbabwean personalities were created in response, highlighting just how easily it can be done.

The fake post reads: “I know this will hurt a lot of my supporters, but it seems the introduction of the Z$ is working. Prices are actually coming down!” 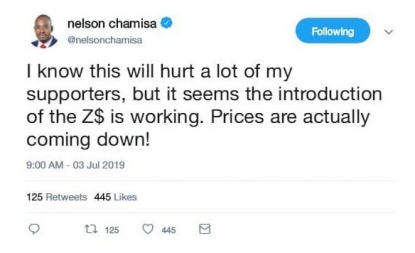 As reported by AFP last month, Zimbabweans reacted warily to the country's planned new currency, fearful of a return of destructive hyperinflation despite assurances from President Emmerson Mnangagwa.

The fake tweet can be seen archived here on a post by journalist Hopewell Chin’ono, which accused someone in Zimbabwe’s government of fabricating it. “Some in the regime have gotten so desperate such that they are now photoshopping @nelsonchamisa’s twitter account in search of legitimacy,” it said.

Dear brother @TrevorNcube, you are fighting a good battle on local currency front! But some in the regime have gotten so desperate such that they are now photoshopping @nelsonchamisa’s twitter account in search of legitimacy! This young leader’s endorsement must be important hey? pic.twitter.com/UFwdacm87C

More fake tweets surfaced, one of them attributed to President Mnangwagwa -- but Ncube alerted Twitter users as a fabricated reply from himself was included in the screenshot. 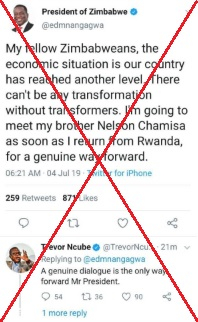 As reported by AFP in February, Chamisa snubbed an invitation by Mnangagwa to join a national summit, insisting he won the July 2018 presidential elections. He was in favour of dialogue but would only attend talks if they were called by a neutral party.

But how were the tweets made?

Many users knew the posts were fake. Some, including here and here, corrected Chamisa by telling him it was not a fake account but rather a fabricated tweet.

Photoshop and many other tools are used to make fake tweets. One method is by using Chrome DevTools, a set of web developer tools built directly into the Google Chrome browser. With it, people can edit pages (or a tweet) and screenshot as it appears.

AFP Fact Check fabricated a tweet by Chamisa using an online generator to show how quickly it can be done. This tweet generator came up first on an internet search -- see below the similarities between the AFP-generated tweet alongside the Chamisa one.

An example of how easy it is to produce a fake tweet on the left, and the one circulating on Twitter on the right

After he was himself targeted with a fake Twitter screenshot, Ncube tweeted a few of his personal guidelines on how to avoid falling victim to such pranks:

1. If it looks too good to be true it is most likely fakenews. Check before sharing

2. If it fits comfortably into your bias and prejudice box it is most likely fakenews

3. If you know it is not true but want it to be truth check before sharing