No, these images do not show suffering Palestinians

A Facebook post shared more than 60,000 times from a page purporting to represent a famous Indonesian Muslim cleric features photos it claims shows the suffering of Palestinians. The images are well-known photos published online from major international news organisations of refugees attempting to enter Europe that have no stated links to Palestinians.

The post contains four photos and is captioned: “Dear God, Palestine is crying again, please protect our Muslim brothers and sisters there. If you are Muslim, please share this information with your groups so that many people will pray for them. Hopefully, those who share will go to heaven, Amen.” 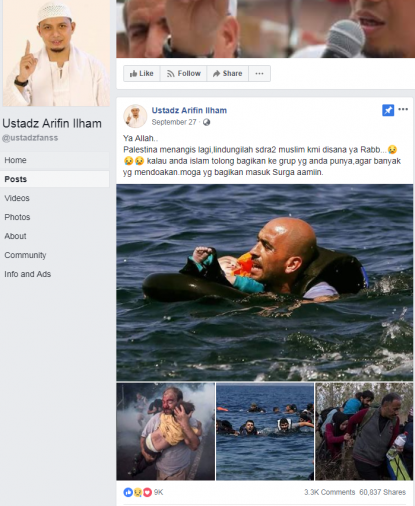 It has been shared more than 60,000 times since being posted to Facebook on September 27.

Google Reverse Image results show the four images have no stated links to the Palestinians, rather they are of the migrant crisis which has seen millions of people from Syria and other countries in the Middle East seek refuge in Europe.

The post’s main photo of a man swimming with a baby was taken from a Reuters article on September 15, 2015. It was captioned: “A Syrian refugee holding a baby in a lifetube swims towards the shore after their dinghy deflated some 100m away before reaching the Greek island of Lesbos, September 13, 2015.”

That Reuters photo appeared in a Daily Mail article, which also contained the third photo in the Facebook post of other people swimming.

The caption in the Daily Mail article for the third image of the people swimming reads:

“Some 34 people, including 15 children, drowned off the coast of the Greek island of Farmakonisi after their wooden fishing boat started taking on water. Pictured, refugees make a desperate swim for shore yesterday after a rubber dinghy burst 100m off the coast of Greek island, Lesbos.”

The second image in the post of a bloody-faced man holding a child is a Pulitzer Prize-winning image taken by Sergey Ponomarev for The New York Times from Serbia in 2015.

The caption in this post by The New York Times on the photo has the following caption:

“A man tries to shield his child from police beatings and tear gas at the border crossing in Horgos, Serbia. Baton-wielding Hungarian riot police unleashed tear gas and water cannons against hundreds of migrants after they broke through a razor-wire fence and tried to surge into Hungary from Serbia, September 16, 2015.”

The last image in the post of people walking through a grassy field is a Getty Images photo taken in Hungary and published on September 8, 2015.

Here is the caption of the Getty Images photo:

“Refugees are smuggled through fields and forests in an attempt to evade the Hungarian police close to the Serbian border on September 8, 2015 in Roszke, Hungary. Many migrants fear that if they are forced to officially register and have their fingerprints taken, it will stop them being able to move freely out of Hungary and further into Europe. A lack of clarity on the issue is causing many people to risk being arrested unnecessarily by taking such measures. Thousands of migrants have continued to cross into Hungary over the last few days from Serbia. Since the beginning of 2015 the number of migrants using the so-called 'Balkans route' has exploded with migrants arriving in Greece from Turkey and then travelling on through Macedonia and Serbia before entering the EU via Hungary. The number of people leaving their homes in war torn countries such as Syria, marks the largest migration of people since World War II.”

The Facebook page that posted the images in a misleading context claims to represent Arifin Ilham, a well-known Muslim cleric, and has more than 715,000 followers.

The page sharing the misleading information is not verified by Facebook and most of its posts are not related to the cleric.

The verified Facebook page of the cleric has more than 7.1 million followers. It has not posted the misleading content about the refugees.