No, these are not photos of Honduran migrants burning the American flag

Three photos shared on social media allegedly depict Honduran members of the US-bound migrant caravan burning the American flag. None of the photos were taken in 2018, and one of them actually features a man burning a Trump campaign banner, not an American flag.

“The illegal caravan of immigrants are flying the Honduras flag as they burn the American flag,” claims the caption of a post similar to those shared several hundred thousand times over the past weeks, many of which have been removed from Facebook. The timing and the language of the post suggests that the people allegedly burning flags in the photos are members of the migrant caravan that started travelling toward the American border in October 2018. 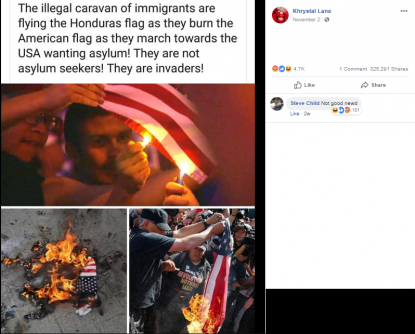 An earlier version of the collage, which was also deleted since, was shared on Facebook on October 22, and accumulated more than 10,000 shares in a single day.

However, none of the photos featured in the post were taken in 2018, nor do they involve members of the migrant caravan.

The close-up photo on the top of the collage depicts people holding what looks like an American flag, so that others holding lighters may better burn it. This photo is from May 24, 2016, in Albuquerque, New Mexico. Demonstrators had gathered to protest a campaign rally by then-presidential candidate Donald Trump at the Albuquerque Convention center.

Although it features the American flag’s iconic red and white stripes, the item being held is actually a Trump campaign banner. The top right of the image (circled) shows that the stripes do not cover the entire right side of the banner, as they would on the American flag. 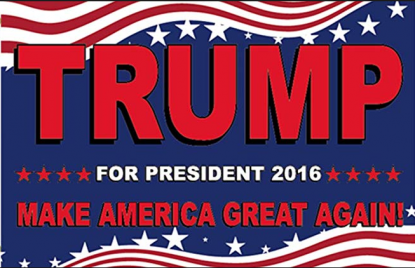 Screenshot of a 2016 Trump campaign banner

Video footage of the event shows a wider frame of the same scene, in which the full banner is clearly identifiable.

The flag on the ground 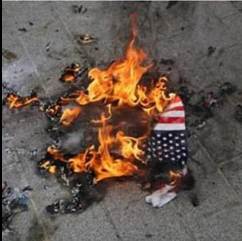 The photo on the bottom left shows a real American flag burning on the ground. However, the photo was taken on September 11, 2010, in front of the American embassy in London. The flag was burnt during a demonstration protesting American pastor Terry Jones’ call to burn the Koran, an invitation that prompted outrage around the world.

The photo was taken by photographer Dan Kitwood, for Getty Images. 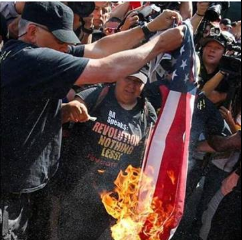 The third photo depicts a man dressed in black holding a burning American flag while a crowd looks on. The group includes a woman wearing a shirt with the inscription, “Revolution Nothing Less.”

This photo was taken in Ohio on July 20, 2016. On that day, several supporters of the “Revolutionary Communist Party, USA,” a far-left political group, had gathered outside the Quicken Loans Arena, in Cleveland, to protest against the Republican National Convention that was being held inside that day. Reuters photographer Adrees Latif took the photo.

It is clear from the location, the date and the subjects of the three photographs in the collage that these pictures do not depict scenes from the Central American migrant caravan trekking toward the United States. The migrant caravan has been the target of multiple false social media posts since it started to receive media attention.