No, the American Red Cross is not sponsoring the migrant caravan

“Why is American Red Cross providing to Mexico Caravan headed to invade our border with tents,” asks the caption of a meme shared over 12,000 times on Facebook and Twitter in the past week. The picture above the caption shows a family of migrant sitting on the ground in front of a tent stamped with the iconic red cross of the eponymous charity organization. 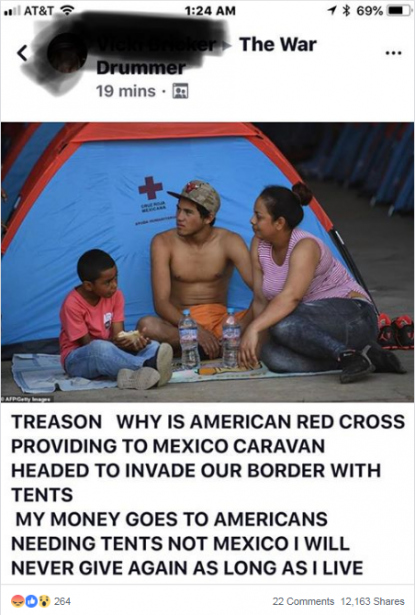 The people featured in the photo are indeed members of the so-called migrant caravan, a convoy of an estimated 7,000 central Americans, mostly Hondurans, currently travelling together towards the United States. It was taken by Agence France-Presse staff photographer Pedro Pardo on October 22, in Tapachula, Mexico. This town in the state of Chiapas hosts the International Mesoamerican Fair, whose grounds were recently opened to migrants, including the family in the photo.

However, the claim that the American Red Cross is providing support to the Honduran migrants currently travelling through Mexico is false. The tent featured on the photo does bear the logo of the Red Cross, but the words “Cruz Roja Mexicana” attest to the fact that it in fact belongs to the Mexican counterpart of the American Red Cross.

Indeed, certain Red Cross societies are providing support to the migrant caravan, though not that of the US. In a press release, the organization explains that “The Red Cross Societies of Honduras, Guatemala and Mexico have mobilized their volunteers to assist people along their journey.”