No recent statements on Ethiopia have been issued by the EU, as this doctored image claims

An image purporting to be from a page on The Guardian website in Britain has been widely shared in Ethiopia with claims that it shows a news story about the European Union (EU) ordering the release of all political prisoners, including jailed opposition leader Jawar Mohammed. The claim is false: the article image and the report itself were fabricated while an EU spokesman denied the organisation had issued a recent statement about Ethiopia.

The post, archived here, has been shared hundreds of times on Facebook in Ethiopia since it was published on October 6, 2020.

“The  European Union (EU) has ordered the immediate release of all political prisoners including Jawar Mohammed,” it reads.

Below the caption is an image of what seems to be a related news report on The Guardian’s website. 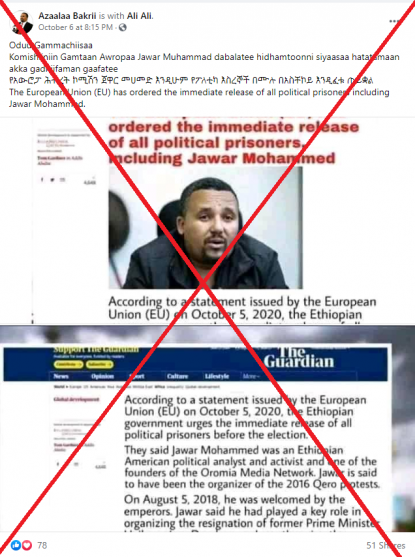 Screenshot of the misleading claim on Facebook, taken on October 20, 2020

Deadly riots erupted in Ethiopia in June following the death of singer and activist Hachalu Hundessa. Jawar Mohammed, a media mogul-turned-politician, was arrested in the capital Addis Ababa on June 30, 2020, as reported by AFP.

He is facing trial on charges of terrorism, incitement to violence, a firearms offence and telecoms fraud.

The Facebook post claims the EU issued its statement ahead of general elections that were meant to be held on August 29, 2020. Voting was postponed because of the Covid-19 pandemic.

Tigray’s ruling party won all contested seats, a move that has further poisoned relations with the federal authorities, as covered in this AFP report.

No evidence of the article by The Guardian

The Guardian’s News and Media press office told AFP Fact Check that the news report in question “is not a published Guardian article”.

A search of the Guardian’s website with the keywords ‘‘Ethiopia’’, “prisoners release” and “EU” also did not yield any recent results.

A search on Google using the same keywords in conjunction with “Guardian” revealed two old articles -- a report from 2018 discussing the release of political prisoners in Ethiopia and another from 2015 after the release of five detained writers.

Comparing the false image to an example of a real Guardian article reveals the fonts don’t match and the headline colours are different (red instead of black).

A screenshot (L) of the doctored Guardian article, taken on October 20, 2020, compared to the real thing (R)

No recent statement by EU on Ethiopia

European Union Commission spokesman Daniel Puglisi told AFP Fact Check on October 23, 2020, that “in recent weeks, the European Union did not make any public statement regarding political prisoners in Ethiopia”.

The European Parliament has done it before: this statement from January 2007 urged the Ethiopian government to free imprisoned opposition leaders and representatives of the media and civil societies, and “to grant them fair conditions of detention and a speedy, fair and transparent trials”.

Doctored headlines are common on social media in Ethiopia.