Images shared on Facebook claim to show newspaper front pages, including The New York Times, accusing Ethiopia’s prime minister of spreading “fake news” to start riots. But the claim is false and the images were digitally manipulated.

A Facebook post published on May 25, 2020, archived here and shared more than 400 times features a picture of Ethiopian Prime Minister Abiy Ahmed on what appears to be the cover of The New York Times.

“Our country's liar of a leader was exposed to the world. It’s not over yet! We will continue exposing you! (sic),” reads the caption in Amharic.

Another Facebook post published on the same day and archived here also appears to show an article about Abiy, this time by one of Kenya’s leading newspapers, The Daily Nation News.

It features the news organisation's nameplate with a similar headline beneath it that reads “Abiy Ahmed resorts to spreading fake news to sow instability in Tigray state”.

The caption in the post, translated into English, is framed as breaking news and claims the morning edition of the paper offers scandalous details about Abiy. “There is nothing more shameful for the government to use the people’s media to create regional instability, says Daily Nation.”

Abiy assumed office in 2018, an ascent fuelled by several years of anti-government protests reflecting widespread frustration with the country's status quo politics, as described in this AFP report.

However, these two headlines have been doctored and neither newspaper has published such articles. The Daily Nation has denied running the story while AFP found no trace of this article about Abiy in The New York Times archives.

A comparison reveals notable differences between the front page from a real New York Times and the fabricated version.

One difference is the layout: The New York Times uses a six-column format whereas the hoax front page only has one. The font used in the doctored image also differs from the traditional type of The New York Times.

Likewise, the presentation of the fake Daily Nation article and the actual layout of a real story on the mobile version of their website differs. 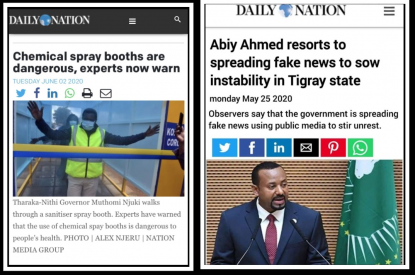 The Daily Nation’s logo is usually indented left of the screen whereas the doctored image has it in the centre, while the background colour has been changed from black to white.

Both fonts are similar, but the colour used to show the date of publication is not the same. The Daily Nation uses light blue with capitalised letters, while the doctored image's date is black and in lower case.

No record of these articles

AFP Fact Check searched The New York Times website for articles relating to Ethiopia and found no mention of an article on Abiy Ahmed published recently.

AFP contacted The New York Times and will update this fact-check should we receive a response.

The Daily Nation Managing Editor, Pamela Sittoni, told AFP: “Readers should establish the veracity of any articles attributed to the Daily Nation from our official website, our e-paper and our social media platforms.”