Footage of armed men singing in speedboats has been shared thousands of times in social media posts claiming it shows current footage of militants in Nigeria’s oil-rich Niger Delta region. Some posts imply that the rebels are preparing to confront the government over its treatment of anti-police brutality protesters. However, the claim is false: the clip has been circulating since at least 2017 and is unrelated to the current demonstrations in Nigeria.

The clip has circulated in numerous social media posts, including this one on Facebook which has been shared nearly 3,000 times since it was published on October 21, 2020 -- a day after Nigeria’s security forces opened fire on peaceful protesters at the Lekki toll gate in Lagos.

“FG” in this case refers to Nigeria’s federal government. Niger Delta is Nigeria’s oil-rich but impoverished region tormented by years of violent attacks, including kidnappings and the destruction of oil installations, by militants demanding a fairer share of revenues for local people.

The conflict was temporarily curtailed in 2009 when Africa’s largest oil producer, which depends on the commodity for revenue and foreign exchange earnings, introduced a government amnesty programme.

The same footage of armed men in a flotilla was also shared on Twitter, as well as elsewhere on Facebook alongside a similar claim.

Protests against police brutality erupted in Nigeria in early October after a video of a man allegedly being killed by police went viral a month before.

The rallies have continued despite the dismantling of the controversial Special Anti-Robbery Squad (SARS) and promises of government reform. 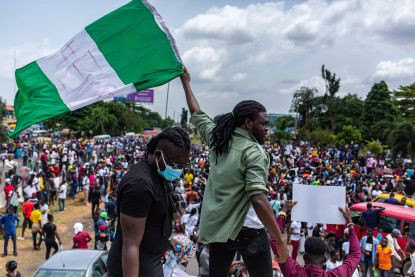 The unrest worsened after security forces opened fire on a large crowd in Lagos on October 20, 2020. The shooting has drawn international condemnation and boosted the global spread of the #EndSARS hashtag on Twitter.

But while some ex-militants indeed issued a threat to the Nigerian government, as reported by the country’s daily newspapers The Punch and ThisDay, the video in the claim has been online since at least 2017.

Using the InVID WeVerify tool, AFP Fact Check ran a reverse image search on keyframes of the video and found it was published on YouTube on June 11, 2017.

The viral footage is among several examples of multimedia content that has been shared out of context in the wake of the unrest in Nigeria. AFP Fact Check recently debunked online posts sharing a video of a military gunner firing into the night with a claim that it shows how troops used live ammunition on civilians during the anti-police brutality protests.