No, this picture did not show a sign saying Indonesia’s healthcare budget has been improperly used to build toll roads

Multiple Facebook posts shared thousands of times feature a picture of a signboard with a text saying money for Indonesia’s healthcare programme has been used to build toll roads. The image has been doctored; the genuine one contains different text with no references to toll roads.

One of the Facebook posts is this January 7, 2019, entry. Below is a screenshot of the misleading post: 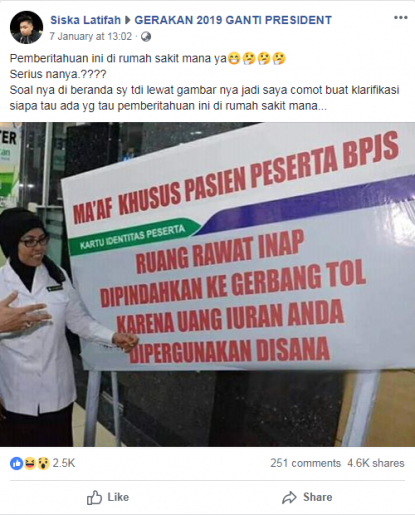 The picture shows a woman standing next to a large signboard with text that translates in English to: “Sorry, attention to patients who are covered by BPJS. Inpatient rooms for you have been moved to near toll road gates because your healthcare premiums have been used to finance toll roads construction”.

BPJS references an Indonesian agency that runs the healthcare programme.

The January 7 Facebook post was shared into the “GERAKAN 2019 GANTI PRESIDENT” (The Movement To Change The President in 2019) group, which supports Prabowo Subianto, the sole rival to incumbent Joko Widodo in Indonesia’s April presidential polls.

It was shared more than 4,600 times in its first two days on Facebook. 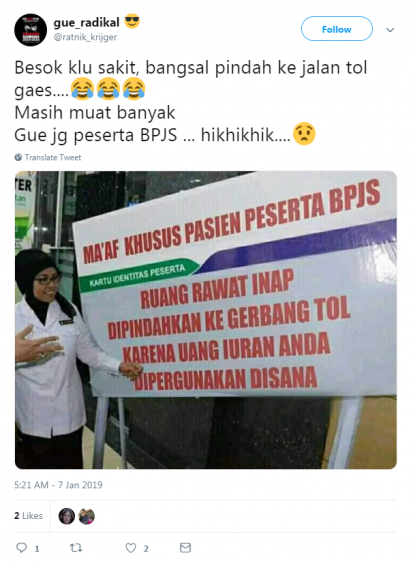 Screenshot of the January 7 tweet featuring the manipulated image.

Google Reverse Image search results found that the photo was manipulated from an image used by Indonesian news outlet Okezone.com in this April 21, 2016 article about the national healthcare programme.

Below is a screenshot of the article with the original image: 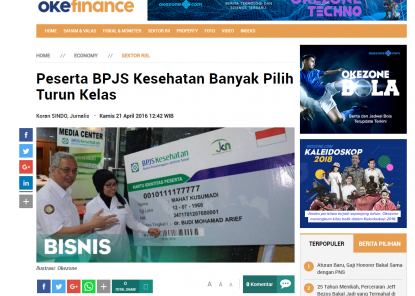 Screenshot of the Okezone.com article with the original photo.

The large signboard in the real image shows a sample of a national healthcare member card.