No, Atiku Abubakar has not made a ceasefire plan to give land and oil to Boko Haram

A widely shared video posted on Facebook claims that Nigerian opposition presidential candidate Atiku Abubakar has made a ceasefire plan with Boko Haram Islamists. But there is no evidence for the claim. Abubakar’s campaign have not announced any ceasefire agreement with Boko Haram. Abubakar’s spokesperson said that no ceasefire plan had been made and that they had no plans to cede Nigerian territory to the group, if in power.

The video claims the deal would give Boko Haram some land and autonomy in the northeastern state of Borno, which has been the epicentre of the insurgency since 2009, and oil fields in exchange for a ceasefire. 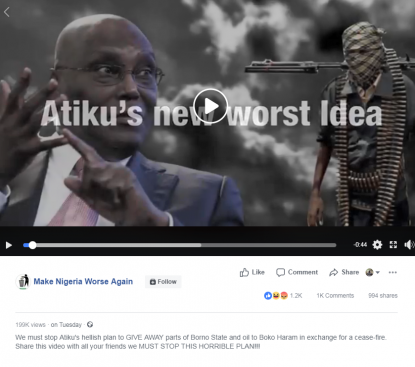 A screenshot taken on January 10, 2019 of a Facebook video claiming that Atiku Abubakar has a plan to give Boko Haram oil and land in exchange for a ceasefire

There is no evidence that either Abubakar’s campaign or his Peoples Democratic Party have announced any such plan and it is not in his manifesto. In a statement to AFP, his spokesperson Segun Showunmi said: “This is high level criminal misinformation that must be investigated.”

The video is captioned “We must stop Atiku's hellish plan to GIVE AWAY parts of Borno State and oil to Boko Haram in exchange for a cease-fire”. It also claims Abubakar plans to give Nigeria to “terrorists”.

A picture posted on January 6 by a Facebook page called “Naija 24h” is the earliest mention of the claim found by AFP. It posts a picture appearing to show militants alongside a picture with Abubakar. Over the image, a text claims, “Atiku reveals plan to hand over land in Borno State and oil to Boko Haram.”

A screenshot taken on January 10, 2019 of a picture posted on Facebook claiming that Atiku Abubakar has a plan to give Boko Haram oil and land in exchange for a ceasefire

The picture has been shared more than 3,000 times.

Abubakar is a wealthy businessman and ex-vice president, from Adamawa State in northeast Nigeria. He is the main challenger to President Muhammadu Buhari in presidential elections next month. Both candidates have pledged to tackle insecurity in the country.

While Chad exploits oil reserves commercially from shared basins under Lake Chad from its side of the border, exploration on the Nigerian side in northern Borno has been curtailed by the violence.