No, this photo does not show a flooded street in Indonesia's capital

A Facebook post shares an image it claims is a scene from a flooded street in the Indonesian capital, Jakarta, that was taken during the time of the current governor.  The photo actually shows flooding on Indonesia’s section of Borneo Island in 2015. 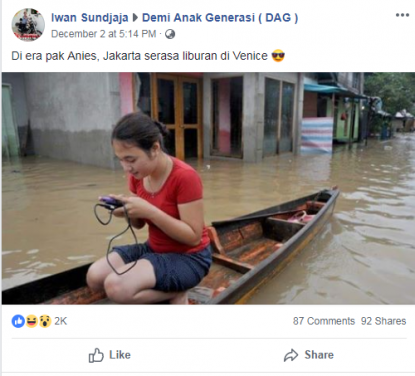 The image -- which attracted more than 2,000 reactions -- has a caption that says: “During the era of Mr. Anies, living in Jakarta is like vacationing in Venice.”

It refers to Anies Baswedan, the current governor of Jakarta who defeated Purnama in the city’s 2017 gubernatorial election.

Purnama was subsequently jailed for blasphemy against Islam over comments he made during the election -- a criminal case pushed by Muslim groups loyal to Baswedan.

A Google reverse image search found the image was taken in 2015 by Indonesian state news agency Antara and shows flooding in Kalimantan -- Indonesia’s section of Borneo island. The rest of the island is divided between Malaysia and Brunei.

The original photo’s caption read: “A citizen uses her mobile phone while in a boat during a flood in a residential area in Balai Karangan village, Sekayam, Sanggau, West Kalimantan, January 19, 2015.”