No, this is not a new photo of Filipino opposition politician Mar Roxas using public transport

Multiple Facebook posts have shared a photo which they claim is a new image showing Philippine opposition politician Manuel 'Mar' Roxas using public transport. The photo is not new; it was posted online in 2014.

The posts, including this one and this one, appeared on Facebook from December 4, 2018, showing Roxas, a political rival of Philippine President Rodrigo Duterte, travelling on Manila’s public train service.

Here is a screenshot of one of the posts: 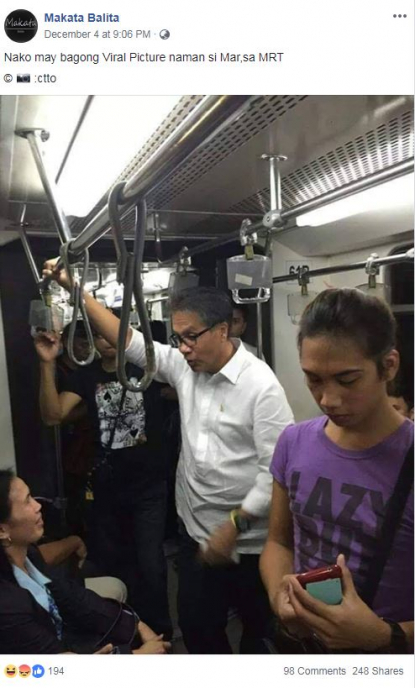 The caption, when translated to English, says: “Oh no, Mar has another new viral picture in the MRT”.

MRT refers to the Metro Rail Transit, the train system in Manila.

The MRT has long struggled with maintenance issues, delays, and overcrowding.

Comments on the posts indicated people suspected Roxas was riding the MRT just for publicity because he was running for senator in the 2019 elections.

One comment, when translated to English, says: "So all the time he’s lived in the greater Manila area, he only took the MRT now - nothing to do with the upcoming elections, surely!"

A reverse search found the photo was posted to Facebook in 2014 when Roxas was a cabinet secretary in the previous administration of Benigno Aquino.

The photo was also published in 2014 by different websites, including here and here.

It was also posted in a 2014 Reddit thread with the comment: “Mar Roxas is pathetic and getting desperate. Apparently taken by a random train rider during the Friday rush hour”.

The misleading posts have been shared hundreds of times since they were posted.