No, this picture does not show the transformation of a severely malnourished Nigerian toddler after he was adopted by a Danish aid worker

A Facebook post claiming to show how a malnourished Nigerian boy significantly transformed after he was adopted by a Danish aid worker is being shared widely again on social media. The post consists of a “before” photo showing the dire state the boy was found in by aid worker Anja Ringgren Loven and an “after” photo which it says is her cuddling the same child, now a healthy toddler. AFP has established that the photos show two different boys, and that while the malnourished toddler was rescued, he was never adopted by Loven.

The misleading post has been shared widely on multiple social media platforms including this Facebook group that has over 270,000 followers and describes itself as a platform that makes Kenyan memes trend.

The after photo shows a healthy boy whose complexion and demeanor seems to have changed since he was rescued from the street in Nigeria.

A caption on the December 5, 2018 post reads:  “Some months back in Nigeria one naked and dying 2-year abandoned child was seen being fed by a lady charity-worker from Denmark - Anja Ringgren Loven, that pic went viral in social media. She later adopted that child and named him Hope. today, Hope looks like this." 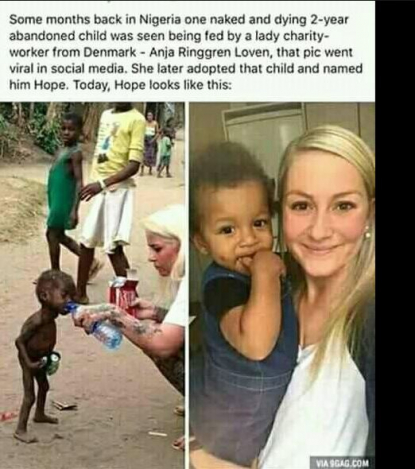 The same post was shared on this Twitter handle that has 345,000 followers, attracting an array of reactions and comments.

Tina Ringgren Loven told AFP that Hope was never adopted by her sister.

The boy was however rehabilitated at her sister’s children centre, which she runs with her Nigerian husband David Emmanuel Umem.

"(Anja Ringgren) Loven has not adopted Hope. She rescued him and he is now living at Land of Hope, which is a children’s center in Nigeria that Anja and her husband David founded," Tina said.

The “after” picture that purported to reveal how Hope had transformed after the rescue was, in fact, that of Loven’s son, David Jr,  being held by his aunt, Maria.

“The picture on the right is a picture of Loven´s niece named Maria, and the boy Maria is holding is Loven´s son David Jr. The claims made in the attached post is false,” Tina told AFP.

One year after Hope was taken into the orphanage, Loven recreated the day she rescued him with a photoshoot, reporting he was now healthy and going to school. 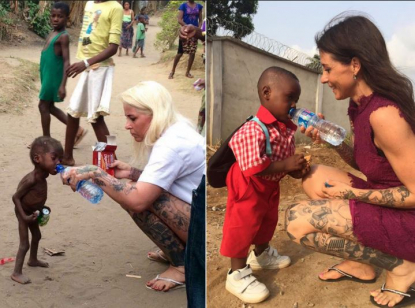 Here is a video of what the boy looked like a year after his rescue, as shared by Anja’s husband.