No, these are not photos of Chinese-funded road built under Philippine President Rodrigo Duterte's flagship infrastructure program

A Facebook post shares multiple photos of a collapsed road. The post claims the road was funded by the Chinese and build as part of Philippine President Rodrigo Duterte's flagship infrastructure program. The claim is false and the road is not part of Duterte's official "Build, Build, Build" program.

The post claims the road was constructed as part of Duterte’s “Build Build Build” program, which aims to help reduce poverty through infrastructure development. 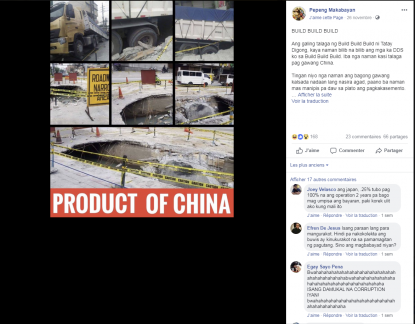 The caption, when translated to English, says: “BUILD BUILD BUILD. Father Digong's Build Build Build program is truly amazing, that's why the DDS are so amazed with it. When it's made in China, it's really something else.”

“Look at this newly-constructed road which was easily destroyed because it was thinly-paved. What can you say about Duterte's build build build program?”

Digong is Duterte’s nickname. His supporters also refer to him as “Father”.

DDS is a reference to Diehard Duterte Supporters.

A reverse image search found the photos in the post came from a November 24 report from Inquirer.net, a local news organization, about a truck that had sunk through a road in Quezon city, a Manila suburb.

Regina Samson from the Quezon city government’s communications center told AFP that the road was a local government project, not part of the Build, Build, Build program.

“A box culvert under the pavement collapsed when a 22-wheeler truck loaded with sand passed over it on November 24, 2018. The box culvert was constructed by the Department of Public Works and Highways way back in the 1970s, and 10 meters of it collapsed,” she said.

“This is just a box culvert, it's part of the regular road-building program of any local government. Build Build Build is for major road projects," she added.

“The project is not part of the “Build Build Build” program. It’s not funded by China”.

The official website of the “Build Build Build” program does not list the pavement of the road in Quezon city as one of its projects. The projects can be seen here.

This map here also shows where the projects are located. There is no project in Quezon city. 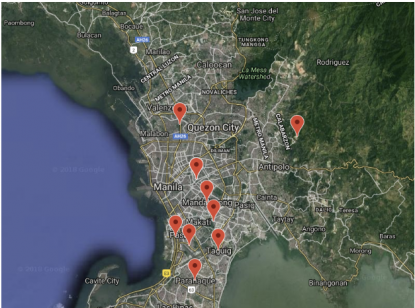