No, this is not South African President Cyril Ramaphosa's home in Cape Town

A Facebook post shared hundreds of times purports to show President Ramaphosa’s sizeable house in Cape Town-- in contrast to the houses of voters for the ruling ANC party. The image is of a house in Las Vegas, Nevada, in the United States.

Within five hours, the Facebook post reading: “well, then stop blaming the white man for your miseries. You get what you vote for”, had more than 790 shares and 218 reactions on the Front National South Africa page.

The post has since been removed from the page but a similar claim can be seen here and here on Twitter. 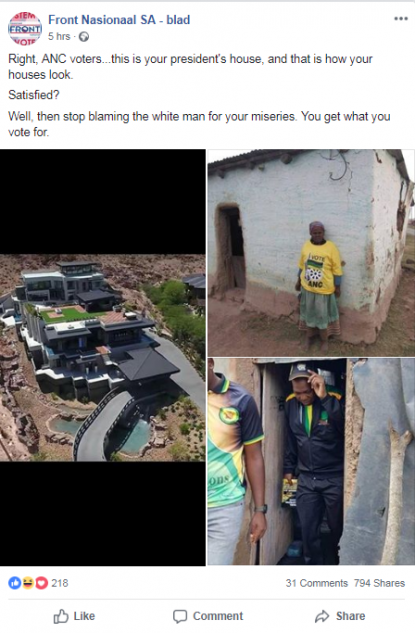 The Facebook page, with over 80 000 followers, purports to be the the official page of the fringe National Party, which says its focus is on the Afrikaans people's right to self-determination.

Comments on the misleading post and similar posts led AFP to a YouTube video of a mansion based in Las Vegas, Nevada in the United States.

Multiple videos and pictures have been taken of the $30 million Echo Park (SkySide) estate in Las Vegas, but there is no evidence to suggest it belongs to President Cyril Ramaphosa.

In July 2015, the presidency confirmed reports about Ramaphosa’s ownership of a plot bought in 2010, based in Cape Town.

When asked if President Ramaphosa resides or owns a home in Las Vegas, presidency spokeswoman Khusela Diko told AFP: “No, I don’t believe he does”.