No, this picture does not show a Muslim woman about to be stoned to death

A post on Facebook with a picture of a woman buried in the ground up to the neck claims to show a Muslim woman about to be stoned to death in Iran. The picture was in fact taken in Colombia during a protest in 2003, where demonstrators voluntarily buried themselves in the ground.

The image appeared on this Facebook Page on January 13, 2019, attracting 322 shares and reactions and 37 comments. In the picture the woman buried up to her neck is seen being fed from a red cup.

A caption reads: “A woman just before being stoned to death in Iran under Sharia laws. At some places on this earth, women's rights are limited to getting a spoonful of water before stoning. Still, want to tell me that Islam is worthy of being part of our civilization?” 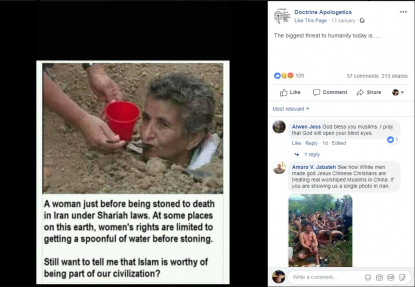 A reverse image search on Yandex located the image on Adobe Stock photos - a provider of ready-to-use pictures.

According to the search, the picture is from a series taken by Reuters news agency. A caption identifies the woman as 66-year-old Colombian Maria Gabriela Ruiz.

Ruiz was among three people buried in the ground in protest against the Colombian government for not safely relocating 150 displaced people in the city of Cali.

“Colombian Maria Gabriela Ruiz, 66, (C) is aided by a woman while she lies buried in the ground up to her neck along with Olmedo Gomez, 42,(bottom) and Nicolas Salazar, 32, during a protest in a popular sector of Cali, July 4, 2003. Three people, two men, and a woman buried themselves three days ago in protest against the government because 150 displaced persons have not been relocated to a safe sector of Cali,” the caption by Reuters reads.

Another image from the protest shows Ruiz being comforted by her grandchild as she lies in the ground. 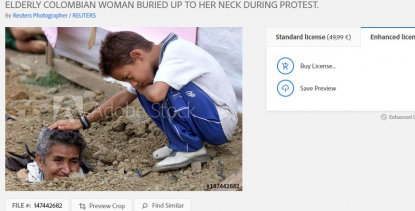 Ruiz being comforted by her grandchild

Stoning is still a punishment carried out under Sharia law in some Muslim countries.

In 2013 Human Rights Watch (HWR) criticised Iran for reintroducing stoning to death as the explicit penalty for adultery in its amended draft penal code.