No, this video does not show Indonesian officials collecting data from mental patients for election voters list

A video of a man hitting another man has been viewed more than one million times after being posted to Facebook linking it to an article about Indonesian officials collecting data on mentally-ill people to update voter lists ahead of presidential elections in April. The post is misleading: the video is at least eight months old and can be traced back to social media reports about an incident that has no reported links to the election.

The Facebook post, which has been viewed more than 1.3 million times since it was posted on January 9, 2019, contains a video of a man slapping another man in the face alongside a screenshot of an Indonesian news report. 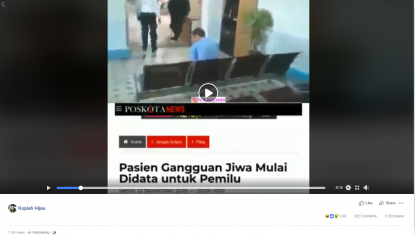 The media report is dated November 12, 2018, and features the logo of Jakarta-based news outlet Poskotanews.com. It is headlined: “Officials have started to record data of mentally-ill patients for election voters’ list”.

Poskotanews.com did publish an article with an identical headline on November 12.

Bekasi is a city near Indonesia’s capital, Jakarta.

The article does not contain any video clip and there is no evidence to suggest the footage in the misleading Facebook post is linked to the Poskotannews article.

There is also no evidence suggesting the video shows what is reported in the Poskotanews.com article.

The video clip has circulated online since at least April 2018.

The earliest version AFP found of the video was here, on the Dampit TV Facebook page on April 28, 2018.

The Facebook post is captioned: “Be careful when you sit in a mental hospital. Make sure you’re not slapped in the face.”

It was then published in this April 29, 2018 article by Indonesia’s Liputan6.com.

The Liputan6.com article was titled “VIDEO: This man was slapped in the face by a mental hospital patient”.

Neither story mentions any links between the video and election-related activities.