No, these pictures do not show a major rally against Indonesian President Joko Widodo in his hometown

Posts on Facebook and Twitter claim to show photos of a major rally supporting Indonesian presidential candidate Prabowo Subianto in Solo, the hometown of incumbent Joko Widodo. The photos are taken from mainstream media reports of rallies in 2016 in Jakarta by Muslim groups against the city’s then governor.

One of the posts featuring the photos is this January 13, 2019 entry which has been shared more than 4,000 times. It is captioned: “In Solo. Very cool. Prabowo-Sandi 02 has taken the city.”. 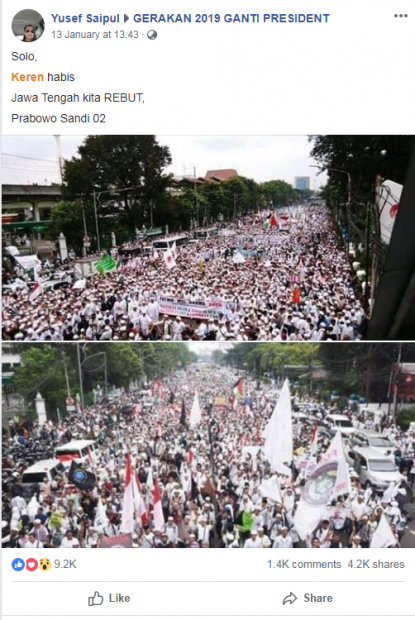 Sandi refers to Subianto’s running mate, Sandiaga Uno, and “02” is the pair’s ballot number in the upcoming Indonesia’s elections, to be held in April, 2019.

Solo is a city on Indonesia’s Java Island where Widodo originates from. Widodo was a two-term mayor in Solo before becoming president.

Ferdinand Hutahaean, a politician from a pro-Subianto political party, also shared the images to Twitter in a misleading context on January 12. His tweet claimed they showed a rally “this morning” that wanted Widodo to be ousted from office. 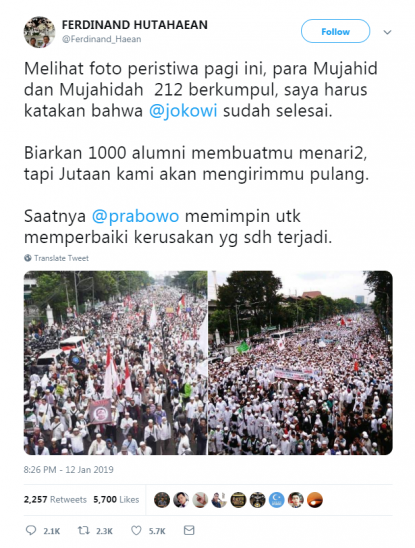 The tweet says: "Having seen the photos of the event this morning, at which sympathizers of the 212 movement gathered, I have to say that @jokowi is done. 1,000 people may be unable to make you step down, but millions of us will force you to do so. Now is the time for @prabowo to lead and repair the damages that have occurred."

The "212 movement" refers to participants of a December 2, 2016 rally, which called for the jailing of the Indonesian capital’s then governor, Basuki Tjahaja Purnama, or Ahok, for blasphemy.

Google reverse image results show that the pictures are from a massive rally on November 4, 2016, in Jakarta by Muslim groups that also called for Ahok to be jailed for blasphemy.

The first photo appeared in this article and this one about the rally.

A white banner saying: “A fatwa by Indonesian Ulema Council on Ahok” -- referring to the agency’s document on the case -- can be seen in the image. 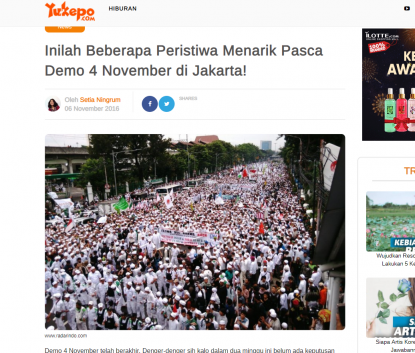 Screenshot of one of the articles with the image of the November 4, 2016 rally.

The second picture can be seen in this Rappler.com article about the December 2, 2016 Muslim rally with similar motive to the one held in Jakarta the month before. 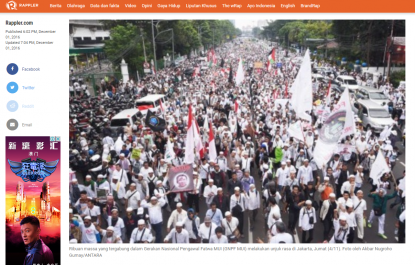 Screenshot of the Rappler.com article with the photo of the November 4, 2016 rally.

It was a photo taken by Indonesian state-run news agency Antara of the earlier rally, and was captioned “Thousands of people grouped under the National Movement To Safeguard The Indonesian Ulema Council’s Fatwa (GNPF MUI) stage a rally on November 4 in Jakarta.”

According to local media reports, there was a Muslim mass prayer in Solo on January 13, 2019. This CNN Indonesia report quoted a local police chief saying that "there were speeches that called on the crowd to vote for the Prabowo Subianto-Sandiaga Uno pair" at the event.

But only around 1,000 people attended the prayer meeting, according to this article on Tempo.co, which also posted photographs of the January 13 event.