An image has been shared hundreds of times in Twitter and Facebook posts that claim it shows a dingo eating a shark on a beach in Australia, next to two entwined snakes. The image has been doctored; it consists of at least two separate images.

The image is contained in this tweet, which has been retweeted more than 1,000 times since it was posted on April 22, 2018.

The caption of the tweet states: “Meanwhile in Australia... A Dingo eats a Shark while 2 snakes have sex...(or fight..) #Australia”.

Dingos are wild dogs found in Australia; here is an webpage about them on the Australian Museum website. 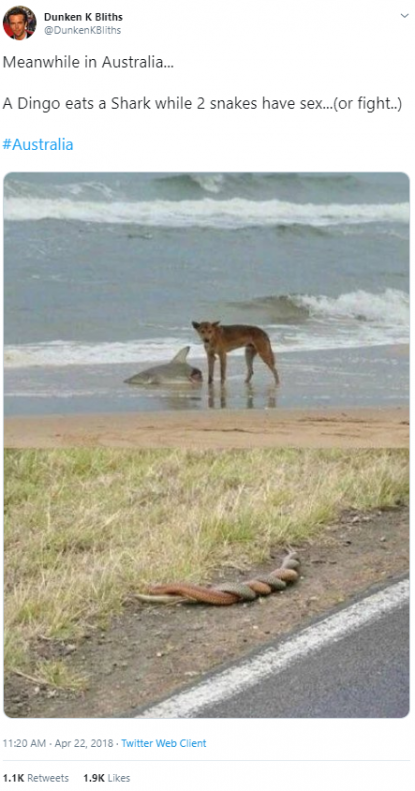 The image below contains four of these replies, selected by AFP, with the posters’ identity redacted:

The same image and similar claims have been shared tens of thousands of times across social media, such as here on Facebook, here on Twitter and here on Reddit.

British comedian Ricky Gervais also shared the photo in this April 28, 2018, tweet with a caption that reads: “Just when I was thinking of coming to Australia with my next tour….”

But the image is not a genuine photo; it has been doctored.

The area where the grass meets the sand is a horizontal line separating two images that have been combined into one, as shown below with red and yellow rectangles: 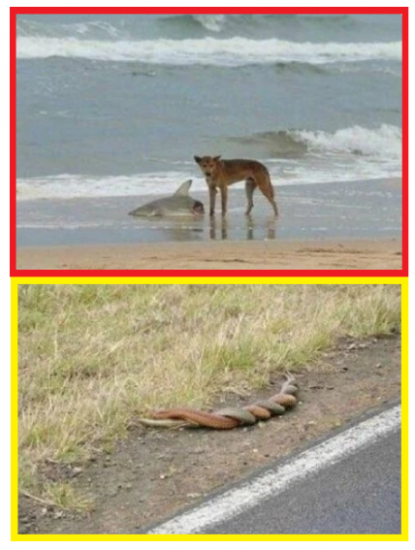 The upper half of the misleading image, which shows a dingo and a dead shark, has been shared repeatedly online since at least 2011.

For example, it appears here on a website from the Czech Republic; in this 2013 Reddit post and here in a post dated October 16, 2011, on a website called The Meta Picture, alongside the caption: “A wild dingo eating a shark. Welcome to Australia.”

Below is a screenshot of the image as it appears in the Meta Picture post. It remains unclear whether this is a genuine photo or if it, too, has been doctored: 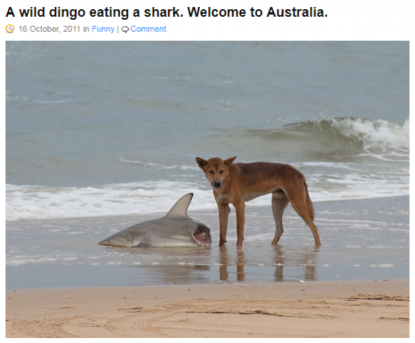 The bottom half of the misleading image, which shows two snakes entwined, matches this photo posted to image-sharing site Imgur on February 9, 2012, with title: “Took a rare photo of 2 Copperhead Snakes in Australia”. 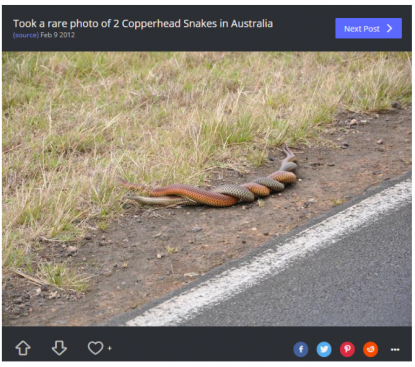 YouTube videos of copperhead snakes mating here and here also show two snakes entwined around each other in a similar fashion to the photo.

An information page on copperhead snakes here on the Australian Museum website says:

“Copperheads are restricted to relatively cool and cold environments in southeastern parts of Australia, including Kangaroo Island, Tasmania and the Bass Strait Islands.”

Meanwhile, on its page about dingoes, the Australian Museum says:

“Having been in Australia for over 4,000 years, Dingoes inhabited many parts of mainland Australia but never became established in Tasmania.

“After European colonisation and the growth of pastoralisation, there was a concerted effort to remove Dingoes from farming areas. As a result, Dingoes are mostly absent from many parts of New South Wales, Victoria, the south-eastern third of South Australia and from the southern-most tip of Western Australia.”