A photo of a Sri Lankan newspaper article which reports that a man who farted in a mosque in Pakistan was sentenced to death has been shared hundreds of times on Facebook. The report is false; the photo in the newspaper report actually shows a Canadian citizen who was sentenced to 13 years in prison in June 2018 for manslaughter; the story about a death sentence for farting originated on a satirical website.

The photo of the misleading newspaper report was published here in a Facebook post on June 9, 2019 where it has been shared more than 800 times. 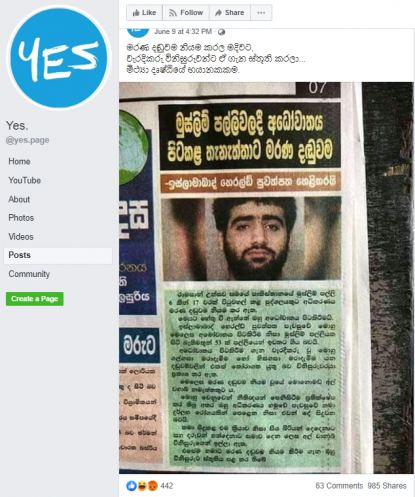 The Facebook post’s Sinhala-langauge caption translates to English as; “Not only has the death penalty been imposed, the Judges had been thanked as well...The dangers of following supersititons…”

The Sinhala newspaper article in the photo translates to English as: “An individual who was ousted from six mosques on 17 occasions during the Ramadan season, has been sentenced to death by Pakistani Courts.

“The reason for the death penalty is passing gas while he was inside the mosque. Islamabad Herald newspaper reports that about 53 individuals had to evacuate a mosque once when the said individual passed gas.

“The judge declared the individual guilty of farting and asked that he choose between being stoned to death or being beheaded.

“The individual sentenced to death has been identified as Mohamed Al-Wahab.

“Lawyers had refused to represent him and he had testified before Courts that his continuous flatulence is due to a health condition.

“He had also asked the judge to pardon his two wives and seven children.

“He also thanked the judge for sentencing him to death."

The photo in the misleading post shows a page from the Sinhala language daily newspaper Divaina. A keyword search of the newspaper’s online archive found this online version of the same article published on July 05, 2017.

The same photo of the newspaper article was shared in on Facebook here and here with a similar claim.

The claim is false; the photograph included in the newspaper report actually shows a Canadian citizen who was sentenced to 13 years in prison in June 2018 for manslaughter; the story about a man sentenced to death in Pakistan after farting in a mosque originated on a satirical website.

A Google reverse image search for the photo of the man in the false newspaper article led to this article published by the Ottawa Citizen on April 16, 2016. Screenshot of the article from Ottawa Citizen, which reveals the mugshot used in satirical article is of a man wanted for murder in Canada

The report states that a 23-year-old man named Behnam Yaali was arrested on Friday, April 15 in connection with the killing of his former girlfriend Christina Voelzing.

This report published by the Ottawa Citizen on June 6, 2018, states Yaali was subsequently sentenced to 13 years in prison for the killing.

Another reverse image search led to this article, which contains the same image, published on a satirical website ‘World News Daily report’ on June 30, 2017.

The headline states; “PAKISTAN: MAN SENTENCED TO DEATH FOR FARTING IN MOSQUE DURING RAMADAN”.

The claims in the satirical piece are identical to the information published in the Sinhala newspaper article.

The website included this disclaimer page noting their articles are ‘satirical and fictional’ in nature.

Here is a previous fact check report by AFP Nigeria about the same hoax.