No, a major Indonesian newspaper’s survey does not show President Joko Widodo badly trailing his rival ahead of 2019 elections

A Facebook post features an image that claims to show the results of an Indonesian newspaper's survey for 2019 elections placing President Joko Widodo well behind his sole challenger. The image was doctored from a social media post about the original poll, which gave Widodo a 20-percentage-point lead.

The image was posted to a Facebook group that supports Widodo's rival, Prabowo Subianto, on October 26.

It claims that 72.7 percent of respondents favoured Subianto and 22.6 percent supported Widodo. 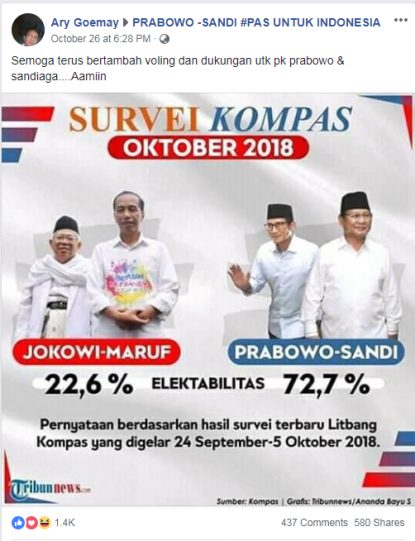 The post contains text saying: “This statement is based on results of the latest survey from Kompas’ research and development division held between September 24 and October 5 2018.”

Kompas is a major daily newspaper in Indonesia.

The logo of Tribunnews.com, a sister publication of Kompas, can be seen in the bottom left hand corner of the image.

The post, which attracted 1,400 reactions and more than 580 shares in 10 days, is captioned: “Let’s pray supports for Prabowo and Sandiaga will increase. Amen.”

The post copied key parts of an original image of a genuine survey by Kompas from September 24 to October 5 that reported support for Widodo at 52.6 percent and Subianto at 32.7 percent.

The genuine results were published widely by Kompas and Tribunnews on October 24.

The results can also be seen on Tribunenews.com and Kompas.com.