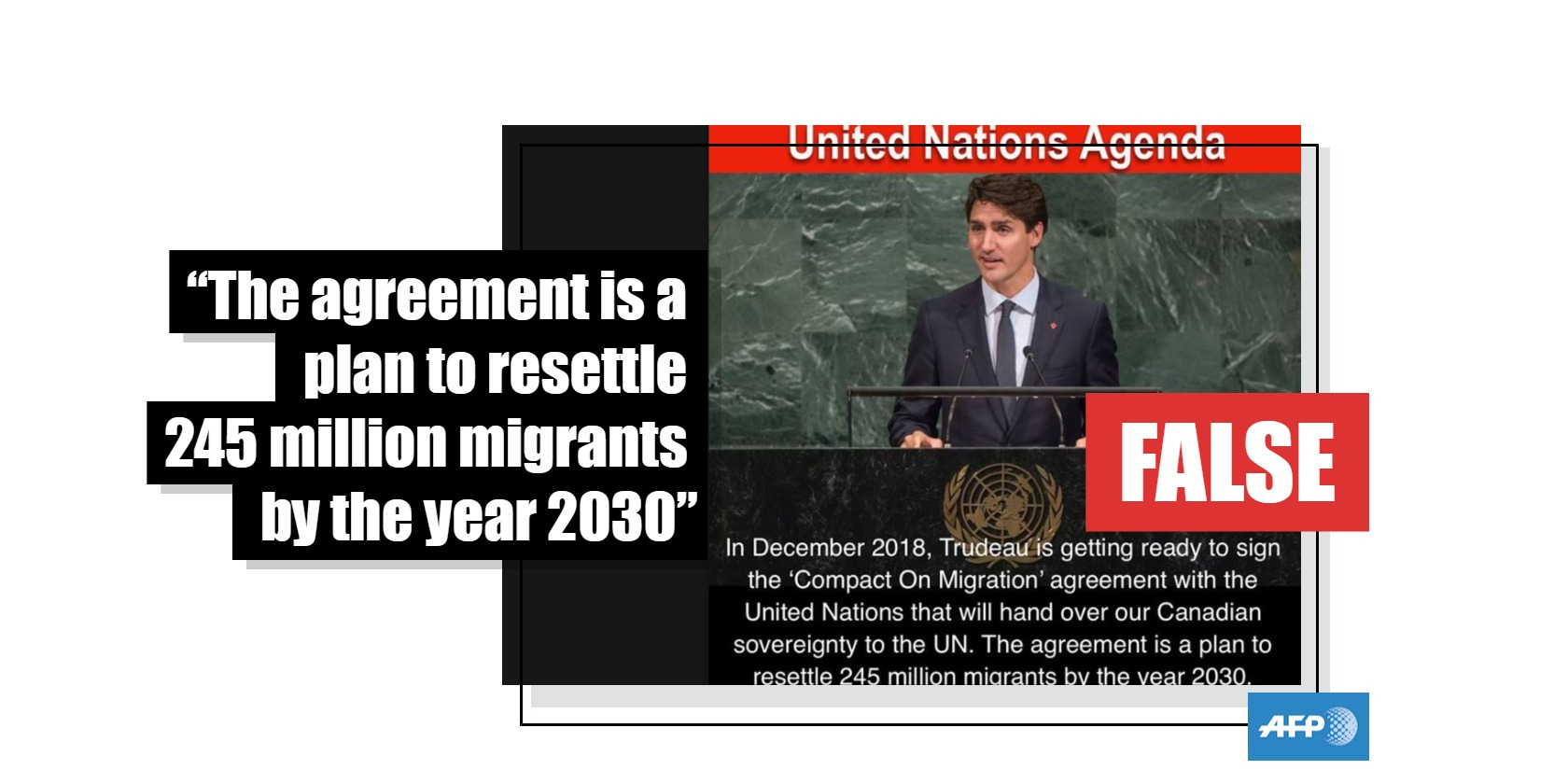 Various online posts claim that the United Nations’ Global Compact for Migration features plans to resettle 245 million migrants throughout the world and strip nations of sovereignty over immigration. That is false; the migration pact is a non-legally binding agreement between UN nations that aims to regulate migration flows and cannot legally impose anything on its signatories.

“Trudeau is getting ready to sign the ‘Compact On Migration’ agreement with the United Nations that will hand over our Canadian sovereignty to the UN. The agreement is a plan to resettle 245 million migrants by the year 2030.” This claim, and others like it, have been widely shared on Canadian social media over the past two weeks. In the comments, rumors of a “globalist open border world” abound. 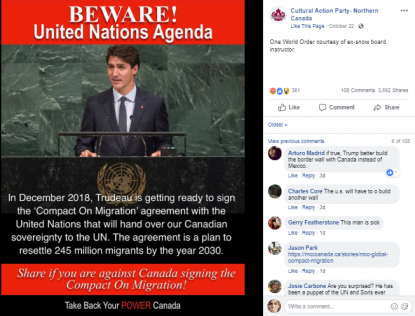 Canada’s Prime Minister Justin Trudeau is expected to sign the Global Compact for Migration (GCM) in December at a summit in Marrakesh, but the UN text, which was finalized in July 2018, is not what these online posts portray it to be. The GCM agreement is a roadmap for the management of increasing migration flows throughout the world, focused on 23 objectives, such as ensuring that all migrants have proof of legal identity, or enhancing the availability of pathways for regular migration.

It is unclear why the posts highlight a figure of 245 million migrants. The estimated number of migrants worldwide, defined as people living outside their country of birth, was 257.7 million in 2017, according to the United Nations Department of Economic and Social Affairs. Contacted by AFP, the authors of the posts did not provide a source for the 245 million migrants figure.

The alleged obligations of the signatories to the agreement towards the UN and the subsequent loss of national sovereignty is unfounded. The document’s preamble states that the “Global Compact presents a non-legally binding, cooperative framework,” meaning that no signatory could be legally imposed to uphold any measure.

According to Jürg Lauber, Swiss ambassador to the UN and co-facilitator of the Global Compact, “the GCM does not prescribe how states implement its objectives. States are free to choose how to pursue implementation in line with their priorities.“

Leonard Doyle, spokesperson for the International Organization for Migration, reaffirmed to AFP a statement by the Special Representative for International Migration at the UN, Louise Arbour, that the GCM “doesn’t affect the right to manage borders. It is hoping to try and instill some order into cross-border movement so that it is less chaotic, less problematic for governments.”

In 2016, all 193 UN member states signed the New York Declaration that planned for the creation of a migration agreement. Since then, the United States refused to sign the GCM, and Hungary and Austria reneged on their participation after signing it.