No, Johannesburg has not banned informal waste collectors

A tweet shared more than a thousand times shows a road sign -- apparently erected in Johannesburg -- that bans informal waste collectors on the street. However, there is no such ban in place and Mayor Herman Mashaba has said the sign was not put up by city authorities. It’s not clear who made the sign, but Mashaba has asked residents to report any similar signs spotted around the city.

The tweet, which we’ve archived here, calls out Mashaba’s Democratic Alliance (DA) party for the sign, saying: “This is the most disgusting thing about the DA led JHB.” 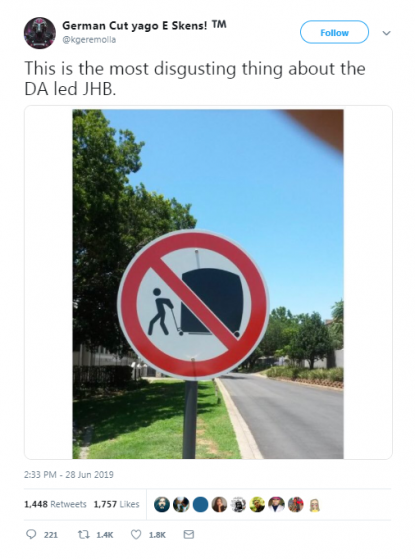 A screenshot taken on July 1, 2019 of the misleading tweet

The tweet started a debate on social media about informal waste collectors, who are a common sight in Johannesburg, often pulling carts piled high with rubbish along the streets. They are often hailed for their role in recycling, though others say they are dangerous road users.

A screenshot taken on July 1, 2019 of a reply to the misleading tweet A screenshot taken on July 1, 2019 of replies to the misleading tweet

A screenshot taken on July 1, 2019 of a reply to the misleading tweet

To many users, the sign appeared at first glance to be official -- it looks similar to other signage used in the city.

But Mashaba replied to the original tweet the next day, telling residents to report any sightings of similar signs. The sign was not an official one issued by the Johannesburg Roads Agency, he confirmed -- there is no ban on informal waste collectors in place in the city.

Fellow residents, this is NOT an official @MyJRA sign. We have not issued these for @CityofJoburgZA
If you have seen these anywhere in our City, please take a pic and give us a location.
We apologise for any miscommunication or inconvenience caused. https://t.co/wrsfTqknC5

On Friday residents expressed their concern over a 'No Waste Pickers' sign in Rivonia. We sent authorities to investigate. The sign was found to be illegal and was removed. The sign WAS NOT erected by the City. We urge residents to contact us if they see any suchs signs.

AFP visited the site where the sign had appeared, on Wessel Road in northern Johannesburg. It’s not clear when the photo of the sign was taken, but by Tuesday it had disappeared -- all that was left was this hole in the ground. 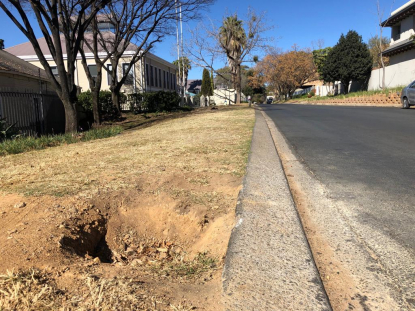 Photo taken at the location of the sign banning waste collectors on July 2, 2019 by AFP Fact Check

If you have more information about the sign,or you know who made it, you can get in touch here.

According to research by the Council for Scientific and Industrial Research (CSIR), in 2014 South Africa’s informal recyclers saved the country’s municipalities up to 750 million rand (US$53 million) in landfill airspace costs. However, they continue to face many daily challenges such as physical abuse and stigmatisation -- read this report here.

No, these photos do not show Donald Trump and Moon Jae-in holding K-pop ‘light sticks’

No, this image does not show a South African government official playing solitaire on her computer while clients wait