No, Indonesia's TV One was not the only broadcaster to cover a huge rally by conservative Muslims in Jakarta

A Facebook post claims that Indonesia's TV One was the sole broadcaster to air footage of a massive rally by conservative Muslims in Jakarta on December 2. But the event was broadcast by at least two other television channels, including CNN Indonesia. 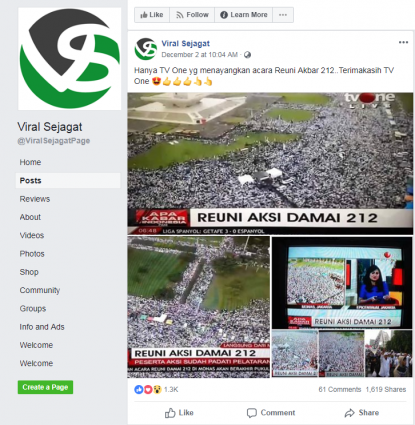 The caption reads: “Only TV One broadcast the 212 Big Reunion. Thank you TV One."

Some 100,000 people attended the rally, which was organised by Muslim leaders who led a series of 2016 demonstrations that called for the jailing of then-Jakarta governor Basuki Tjahaja Purnama -- a political ally of Indonesian President Joko Widodo -- for blasphemy against Islam.

Purnama -- a Christian of Chinese heritage -- was later tried and convicted.

Many of the comments on the Facebook post praised TV One. One Facebook user wrote: “Thank you TV One for being a channel that is loyal to Muslims.”

TV One did broadcast the demonstration live on December 2 and uploaded several clips to one of the broadcaster’s official YouTube channels.

But TV One was not the only broadcaster to air the event.

CNN Indonesia TV reported live on the rally. Here is their coverage:

Local channel iNews TV also covered the rally live on December 2 and posted footage of the event to their official YouTube channel.