No, this photo does not show one tonne of a popular beef curry being delivered to a rally held by Indonesian Islamists

A widely shared Facebook post contains a photograph it claims shows boxes of rendang, a slow-cooked beef curry, given to demonstrators at a huge December 2 rally held by conservative Islamic groups in Jakarta. The image is a stock photo that has been used by Indonesian food catering firms to showcase their services. The image has no links to the rally.

The photograph has been shared more than 11,000 times since it was posted to Facebook December 2 -- the same day as the rally, which police said was attended by some 100,000 people.

It has a caption that says: "Padang authorities sent one tonne of rendang to participants of the 212 big reunion at Monas, using a SRYWIJAYA plane that they rented for the occasion.” 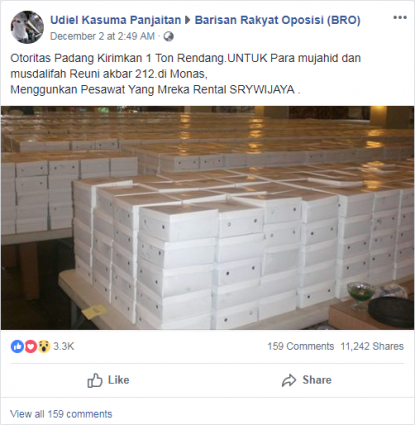 Padang is a city on Sumatra island where rendang originates.

The “212 big reunion” refers to the Islamist rally which was held November 2 at Jakarta’s National Monument compound, better known as Monas.

The rally was organised by Muslim leaders who led a series of 2016 demonstrations that called for the jailing of then Jakarta governor Basuki Tjahaja Purnama -- a Christian of Chinese heritage -- for blasphemy against Islam.

“SRYWIJAYA” is likely a reference to Sriwijaya Air, a privately-owned Indonesian carrier.

Sriwijaya Air spokeswoman Retri Maya told AFP that the Facebook claim the airline had flown one tonne of rendang to the rally was a “hoax”.

The post was shared to the Barisan Rakyat Oposisi group -- an anti-government Facebook group with some 170,000 members.

The photo and caption had been shared more than 10,000 times since it was posted December 2.

A Google Reverse Image search found the photo had previously been used by catering firms to illustrate their services.

For example, it appeared on this 2015 post on the website of a catering firm in Indonesia's second-biggest city Surabaya and was separately used by a caterer in Yogyakarta, the country's cultural capital.