No, this image does not show Indonesia’s vice-president declaring his support for a rival politician

Multiple Facebook posts have shared a picture that they claim shows Indonesian vice president Jusuf Kalla officially declaring his support for opposition candidate Prabowo Subianto in 2019 presidential elections. The posts are false. The photo is an old image that has been taken out of context.

AFP has found at least three Facebook posts featuring the image, which shows Kalla, popularly known as JK, posing for a photo with Subianto and his running mate, Sandiaga Uno. The image shows the trio clasping hands.

One of the posts is this January 30 entry which has been shared more than 800 times and is captioned: “Breaking news!! Mr. JK officially joins the camp of and supports Mr. Prabowo and Mr. Sandiaga Uno at 4 pm.” 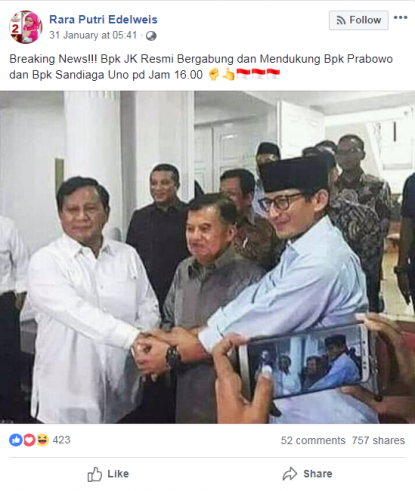 Kalla is the chief adviser for incumbent president Joko Widodo's re-election campaign team, according to Widodo’s party website and this Kompas.com report on February 3.

According to a Google Reverse Image search, the photo was taken from an August 15, 2018 article which did not say Kalla was joining Subianto’s camp or officially supporting him. 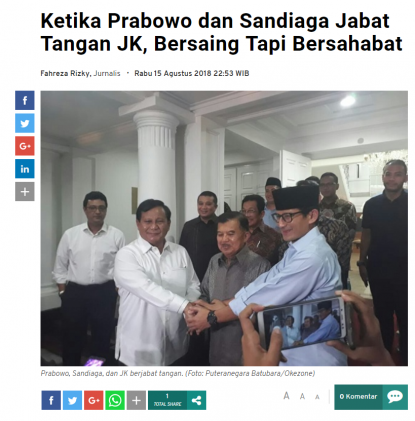 Screenshot of photo in original article

"An intriguing moment took place after the meeting. JK, Prabowo and Sandiaga shook each other hands and smiled while posing for a media photo.

Kalla does not have an official website but he has not issued any statements about supporting Prabowo on his verified Twitter handle.

His aide has said that Kalla “fully supports” Widodo, according to this February 3, 2019 report by state news agency Antara.

No, this is not a photo of Ronaldo, Messi and Neymar giving Pakistan’s Prime Minister Imran Khan a donation to build a dam

No, this is not a photo of Pope Francis meeting Philippine President Rodrigo Duterte