No, Maduro hasn’t called on France to open its borders to Africans

Various online reports have quoted Venezuela’s President Nicolas Maduro as saying France should open its borders to African immigrants because it is “responsible for the misery” in Africa. But the comments aren’t real; they originally came from a parody article.

Articles in French cited Maduro as calling on the French government to scrap visas for Africans, saying: “France has a moral responsibility to open its borders to Africans because it is responsible for the misery there.”

It quoted Maduro as saying France was “the primary beneficiary of African raw materials and most of the time it doesn’t pay a single cent to extract them. It exploits them freely without paying a cent to the governments of these countries. That’s why most of these Africans are coming to Europe, to have a better future.”

The comments spread widely in francophone Africa, from Mali to DR Congo, Senegal to Benin. They were also translated into English on the news and entertainment website How Africa. 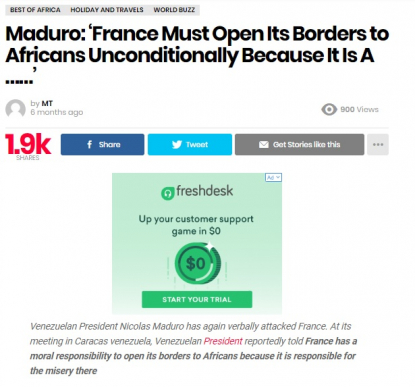 In both languages the posts generated debate over the extent to which France is responsible for poverty in former African colonies. 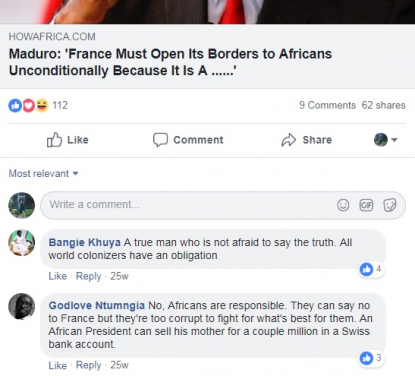 But an advanced search on Facebook using Whopostedwhat shows that the comments first appeared on the site 24jours, which says in its “conditions of use” section that it publishes fictional content.

The suggestion that France is the biggest beneficiary of African raw materials is also false.

According to figures from the World Bank's WITS database, China is the biggest single-country importer of sub-Saharan African raw materials, not France.

In 2017, sub-Saharan countries exported raw materials worth around $14.2 billion to China, and $4.0 billion to France.

While these comments were made up, Maduro has in fact waded into the debate over France’s colonial past before.

After France won the football World Cup last summer, Maduro commented that Africa was the true winner owing to the African heritage of some of its team members.

“How much have they despised Africa, and in the football World Cup France won the trophy thanks to African players or the sons of Africans,” Maduro said, as reported by AFP in July 2018.