No, this is not a photo of Pope Francis meeting Philippine President Rodrigo Duterte

A photograph that has been shared thousands of times on social media claims to show Philippine President Rodrigo Duterte meeting Pope Francis. The claim is false; a reverse image search found that the picture is a doctored version of a photo showing Facebook founder Mark Zuckerberg meeting Pope Francis at the Vatican in 2016.

The photo, which has been posted on Facebook here and on Reddit here, purports to show Pope Francis shaking Duterte’s hand. 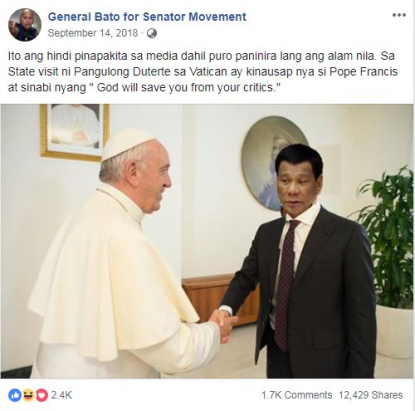 The post, when translated to English, says: “This is not being shown by the media because the only thing they know is to criticize. In President Duterte's state visit to the Vatican Pope Francis talked to him and told him 'God will save you from your critics'.”

Duterte once called Francis “son of a whore”, but later sent the pope a letter expressing his “highest esteem and respect”.

Duterte made plans to visit the pope and personally apologise for the remark, but subsequently canceled them.

A reverse image search traced the photo in the misleading posts back to this news article that the Associated Press news agency published on August 29, 2016. 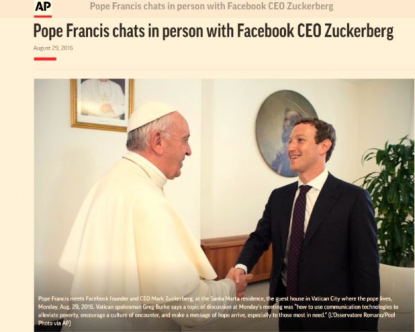 The altered image, which includes Duterte, has been posted on Facebook since September 2018.

The doctored photo and the original both contain these key details: a circular painting in the background, a dark-coloured tie and a plant in a white pot on the image’s far right.

Comments such as the one below indicate that some Facebook users believed the doctored photo was real.

The photo has been shared more than 12,000 times by Facebook groups which support Duterte’s allies since it was first posted in September 2018. 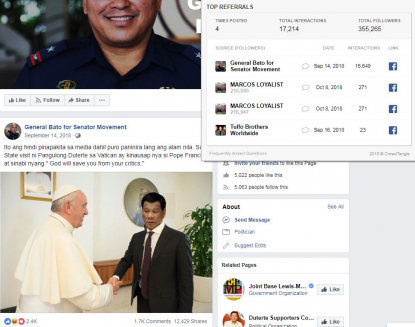 No, this image does not show Indonesia’s vice-president declaring his support for a rival politician

Nazi soldiers shooting a baby: the picture is from a film