No, game meat is not on the menu at the University of Zimbabwe

A document purporting to be a student council notice states that the University of Zimbabwe will begin serving exotic game meat from wildlife parks due to rising prices of beef and chicken. But the document is a forged version of the student council’s usual notices, and the university says no such policy has been announced.

“If this is for real it’s very worrying,” reads the caption on one Facebook post sharing the forged notice. “Students at the university of Zimbabwe as part of austerity, are going in with National Parks and going to eat game meat: even elephants…” 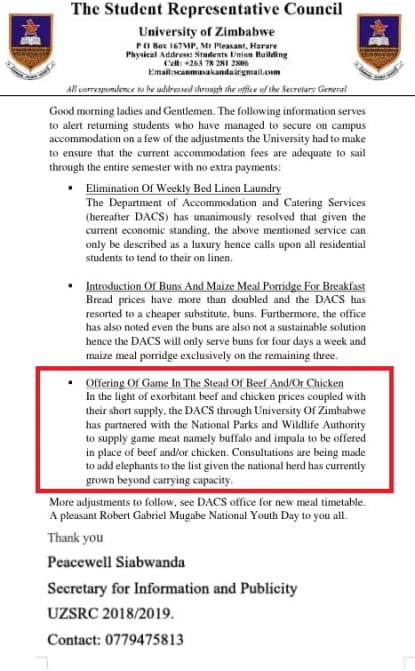 An edited JPEG of the misleading notice saved on February 25, 2019

The forged notice provides real contact information for the university’s Student Representative Council but appears edited, depicting a blurry signature at the bottom of the document in a different font size, as if it were copied and pasted from elsewhere.

The Student Representative Council confirmed that it usually communicated via written notices in this format, but told AFP the notice “was doctored” and “there is nothing true in that article”.

“We wish to make it very clear to all Students that this message is not from the SRC but a fake message, that is not just fake but malicious, fictitious and frivolous,” the student council said in a statement issued on February 22. “It is aimed at causing panic among students.”

The student council said it would stamp and date its future written notices to help prevent forgeries in the future. 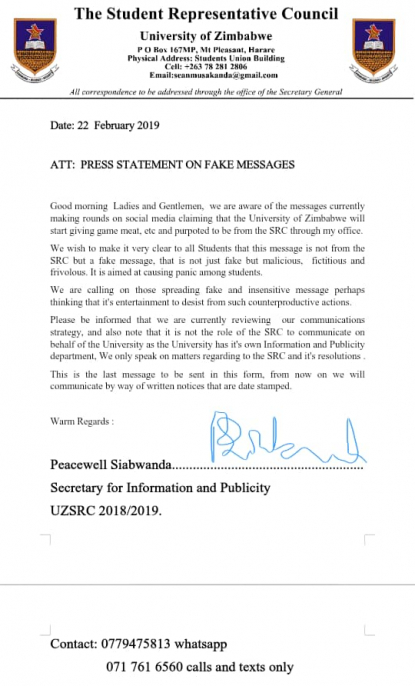 A JPEG of the University of Zimbabwe SRC notice sent to AFP dated February 22, 2019

The University echoed the SRC’s sentiments in a statement saying it “has never, at one time, engaged the Zimbabwe Parks and Wildlife Management Authority or any Safari operator, for that matter, with a view of sourcing game meat for purposes of feeding students.”

Tinashe Farawo, spokesman for the Zimbabwe Parks and Wildlife Management Authority, also said the claim was “untrue and very misleading to the general public” and confirmed to AFP that the letter seen below was sent to the university last week. 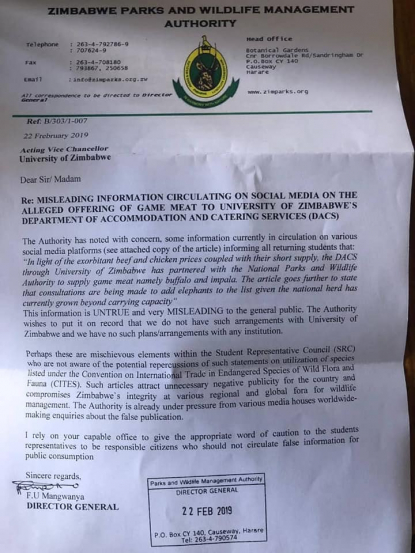 A JPEG of the letter sent to the University of Zimbabwe on February 22, 2019

Earlier in the month local reports quoted a statement from UZ saying tuition and accomodation fees would remain unchanged for 2019:

“The university is conscious of challenges that our students, parents, guardians and sponsors, including Government, are facing under the current economic environment," it read.

No, courts have not ‘quietly confirmed’ MMR vaccine causes autism