No, this is not a video of Indian war planes striking targets in Pakistan

Multiple Facebook posts share a video that has been viewed hundreds of thousands of times which they claim shows an airstrike by Indian fighter jets in Pakistan. The claim is false; the footage is actually from a military simulation video game.

The posts, for example this one which was posted February 26, 2019 and has been viewed more than 13,000 times, contain black and white footage filmed through a target scope which shows people running from a building before it is hit by a rocket and explodes. 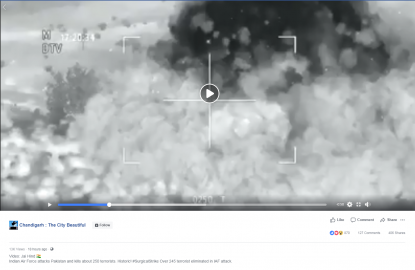 Pakistan’s military rejects that account and says that after Indian planes intruded into its airspace, it scrambled jets and chased the Indian planes out, saying they dropped their payload harmlessly in Pakistani territory while fleeing.

The misleading video has been shared repeatedly on Facebook, for example here, here, and here where it has been viewed more than 400,000 times since it was posted February 26, 2019.

A reverse image search using keyframes from the misleading video found that the footage is actually from a military simulation video game called Arma 2.

Below is the original footage:

The misleading footage can be seen in the original video from 23 seconds onwards.

Below is a screenshot of the footage used in the misleading post (left) alongside the original footage (right) from the video game: